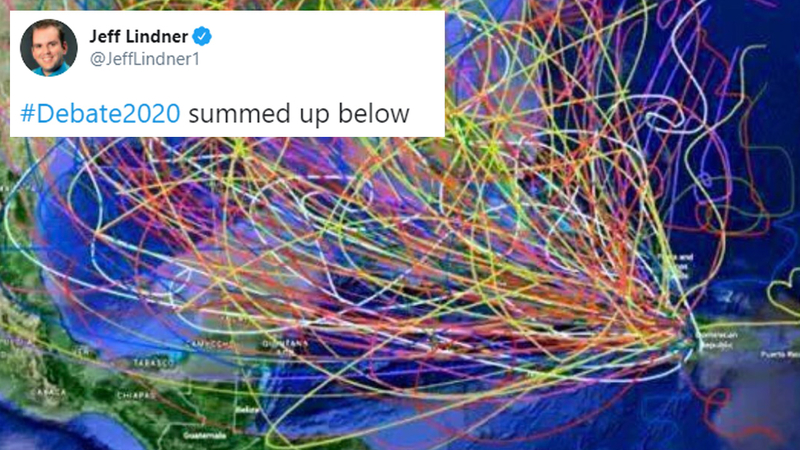 Did the debate leave you feeling confused?

If you have a post-debate hangover because you literally drank too much tequila trying to figure out what was happening on stage Tuesday night, you're not alone.

The first presidential debate between President Donald Trump and Democratic challenger former Vice President Joe Biden was marred by repeated interruptions that sometimes overshadowed each man's stance on important issues with Election Day just a little over a month away.

While many struggled to make sense of it, others determined there was just no sense in it at all.

#Debate2020 summed up below pic.twitter.com/6bFnOUJobH

Maybe it's Lindner for the win. He received plenty of praise in his Twitter replies from followers who felt he summed up the debate perfectly.

"This is the most appropriate tweet of the night. How very meteorologist-y. I didn't think I could love you more," one person wrote.

This is the most appropriate tweet of the night. How very meteorologist-y. I didn’t think I could love you more.

"And that's only the American model," concurred another.

And that’s only the American model😜

Perfect. That’s what my head feels like right now. 🤯

Moderator Chris Wallace of Fox News was also repeatedly talked over, a moment that was not lost on the Twitter-sphere.

Wallace also drew the ire of some people who felt he didn't press hard enough as debate moderator.

Not since @Schwarzenegger starred in Kindergarten Cop have the American people seen someone lose control of the circus more epically than Chris Wallace. He should have turned the microphone off

Actress Gabrielle Union said she started off watching the debate with a wine spritzer, but had to turn to something much harder by the time the night was over.

I started this debate with a white wine spritzer and now I need tequila. Lots of tequila. Doubles. Triples. 😔

I started with tequila. Welcome.

But on a serious note, one of the concerns was whether voters were able to learn more about Trump and Biden's visions. There were also constant reminders online to vote.

"That was a hot mess, inside a dumpster fire, inside a train wreck,” says @JakeTapper about the first presidential debate between Pres. Trump and Joe Biden. “We’ll talk about who won the debate, who lost the debate ... One thing for sure, the American people lost.” #Debates2020 pic.twitter.com/wjMnUmt2WS

The second presidential debate is set for Thursday, Oct. 15 in Miami, Florida. The third debate will follow a week later on Oct. 22 in Nashville, Tennessee.