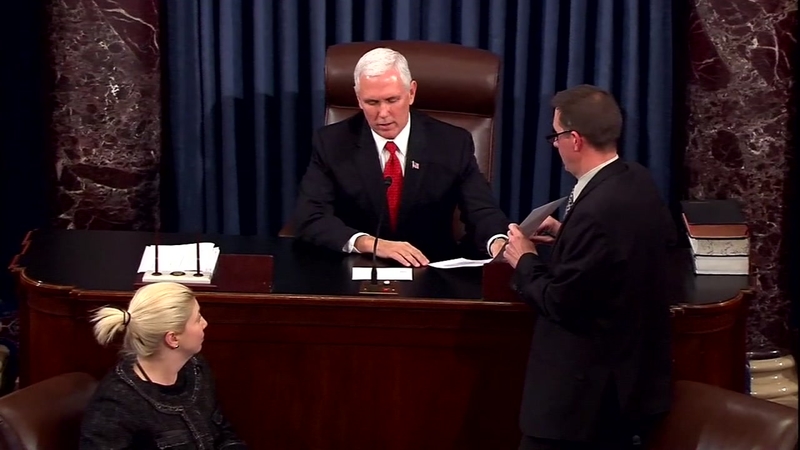 WASHINGTON -- The Senate has passed a nearly $1.5 trillion Republican tax bill that's historic in scope and an urgent political priority for President Donald Trump and the GOP.

Biggest Tax Bill and Tax Cuts in history just passed in the Senate. Now these great Republicans will be going for final passage. Thank you to House and Senate Republicans for your hard work and commitment!

The vote was 51-49, largely along party lines. Not a single Democrat voted in favor of the legislation, which was crafted behind closed doors by Senate Republican leaders. Tennessee Sen. Bob Corker, who calls the growing debt a national security threat, joined Democrats in opposing the bill.

The bill lays the bulk of its tax cuts on businesses and higher-earning individuals and gives more modest breaks to others.

It would bring the first major overhaul of the U.S. tax system in three decades. The measure must be reconciled with a version the House passed last month.

House Minority Leader Nanci Pelosi released a pointed statement shortly after the Senate passed the bill without a single Democratic vote: "In the middle of the night, Senate Republicans sealed their betrayal of the American middle class. Tens of millions of middle class families will be slapped with a tax hike, just so Republicans can give a handout to their billionaire and corporate donor friends. Americans will face higher premiums or go uninsured, watch more good-paying jobs shipped overseas, and see crushing debt dumped onto their children's future.

"The GOP tax scam is a product of haste, carelessness and cruelty. It was written on Republicans' trickle-down delusions, not analysis or facts. It was written first and foremost for the wealthiest one percent, not middle class families trying to get ahead.

"Next week, House and Senate Republicans will go to conference on the GOP tax scam, but the only responsible choice is to scrap these monstrosities and start over. Every Republican who votes to preserve the utter cruelty of this legislation will be forced to answer why they chose to inflict a devastating tax hike on their own constituents. The American people will continue to make their voices heard and hold Republicans accountable for the GOP tax scam."