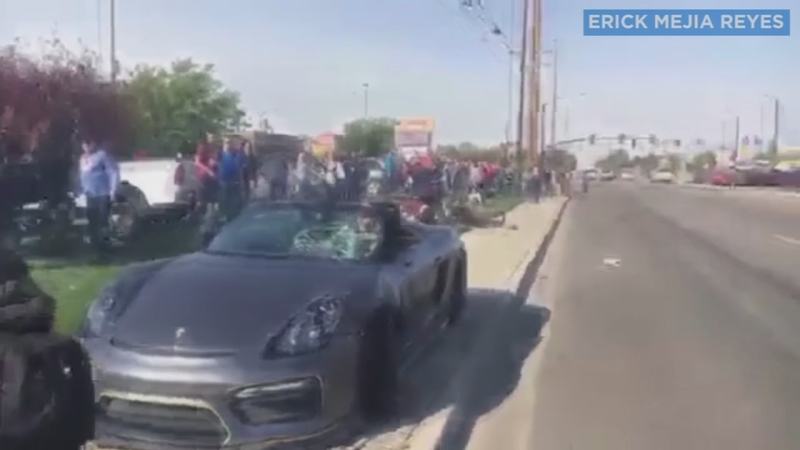 BOISE, Idaho -- A Porsche plowed into a crowd of spectators at a Boise, Idaho, car show, injuring 11 in a horrifying scene that saw bystanders scrambling to tend to the injured, authorities and witnesses said.

Boise police spokeswoman Haley Williams said there were many with serious injuries, but no fatalities had been reported by late Saturday afternoon. Some of those injured were children, Williams said.

Tom Weekes of Boise attended the event with his 12-year-old son and had just moved a few feet back on the sidewalk when the car lost control.

"My son and I were the last two people he missed," he said. "There was a group of kids to the right of us and he hit every one of them."

Weekes said one of young people in their teens or early 20s flew over the top of the car and landed in front of him and his son. He said his first instinct was to help the injured.

"But one of the girls, the way she was lying there, I seriously thought she didn't make it. So I didn't want my son to see, so I took him away and left," he said. "I'm struggling with the fact that I left. That's what I'm struggling with right now."

Justin King, a car enthusiast from Nashville, Tennessee, said he was nearby when he heard the crash and ran to the scene.

"You could hear the screaming," he said. "There were people's shoes that went flying. There was at least one youngster, less than 10, he was kind of unconscious."

"Most people that were hit, it looked like broken legs and that type of thing," he said. "People were rendering aid pretty quickly."

He said a military medic who happened to be at the show was also helping those injured, including a man with a bad cut on his head.

Investigators are waiting to determine the severity of the injuries before they forward their investigation to the prosecutors' office, Williams, the police spokeswoman, said.

King said the show drew about 400 or 500 cars, but only about half remained when the crash occurred shortly before the show ended.

He said car show participants were peeling out for spectators that congregated along the sidewalk to watch.

"People like to show off when they leave these events," he said.

Photos from the crash site show the Porsche convertible with damage on the left front bumper and a smashed windshield.

King said he didn't notice any police at the Boise event until after the crash.

Organizers of the event didn't respond to an email sent by The Associated Press on Saturday.