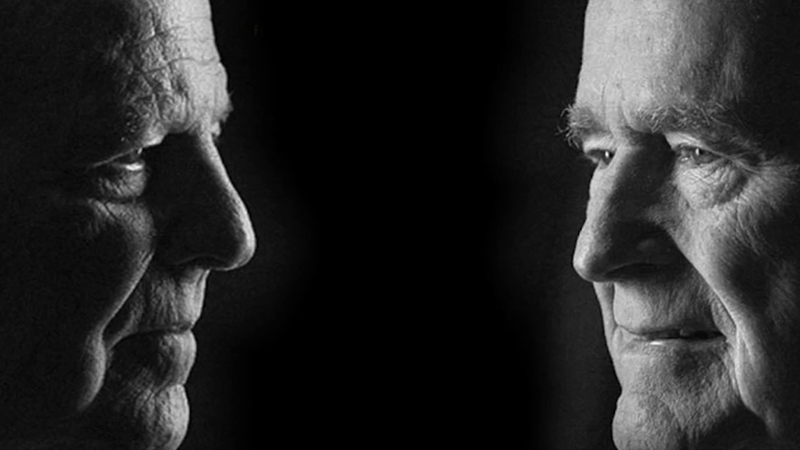 We know them as political giants and as Texas titans.

George Herbert Walker Bush was a congressman, an ambassador, CIA Director, Vice President and President of the United States. James Baker was White House Chief of Staff (twice), Secretary of the Treasury, and Secretary of State.

Now, a new book explores the two men whose friendship spanned decades and changed the arc of a nation.

"We know a lot about George Herbert Walker Bush," author Charles Denyer told ABC13. "We know a lot about James Addison Baker III, but what we don't know is their meaningful six-decade-long friendship which began on the courts of the Houston Country Club."

"It was an important story for Houston, an important story for the world in these really contentious political times to have a story that is about optimism, is about two people who really formed a life-long personal and professional friendship," Denyer said. "It took them all the way to the highest levels of power in the United States government."

Denyer interviewed dozens who had personal and or professional relationships with one or both men. Among those upon whom he relied was Chase Untermeyer, a long-time friend to both, witness to their friendship, and an ambassador to Quatar under the Bush administration. Untermeyer sees the book as topical and relevant, given the politics of the day.

"It was to my eye very much like a brotherhood. That is that George Bush was the elder brother that James Baker never had," Untermeyer said. "Both Bush and Baker believed in the system. They believed in progress. They believed in actually doing something if you get elected to public office. Today politics is all about politics."

Jean Becker was the chief of staff for the former president for the last 25 years of his life. She had a ring-side seat to their friendship, which involved their love of dry vodka martinis with extra olives and oysters. She said theirs was remarkable in the way it forged American diplomacy for decades.

"They were best friends and remained best friends until the very last minute of George Herbert Walker Bush's life," Becker said. "Their friendship probably formed the basis the strongest relationship between a president and secretary of state in the history of the country. That friendship changed the world in some ways."

Denyer hopes that in the wake of a contentious election season, an ongoing fight against the coronavirus, and a teetering economy, his book about Bush and Baker gives us all room to breathe and put the world into perspective.

"I consider both men two of the most consequential statesmen of the last fifty years," he said. "And even though President Bush is president, if you look at Baker's resume, it's equally impressive. He was at one time a campaign gun slinger turned treasury secretary turned chief of staff again and before that secretary of state. There are so many complexities out there in the world, and if you can sit back and read a book that really speaks to the endearing meaning of friendship, I think this one will do it."