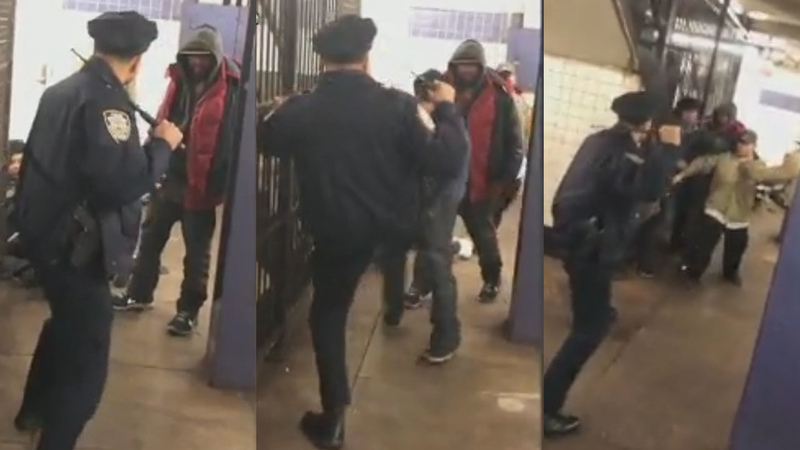 NEW YORK -- A confrontation between five homeless men and a police officer resulted in one of the men falling onto subway tracks.

Nobody was seriously hurt in the incident, but it could have easily gone a different way.

Cellphone video shows an NYPD officer being attacked by a group of men inside of a subway station in lower Manhattan.

The officer could be seen using his baton to defend himself.

At one point he even kicks one of the men charging at him.

"They were drunk," witness Jaheim Eaddy told WPIX. "I could smell alcohol. He was defending himself, backing up with his night stick."

At one point one of the men falls onto the tracks.

That's when Eaddy says the officer radioed for backup.

The NYPD says the officer was working the station by himself and was following protocol, which is to stop the threat.

We're told the men were later taken to the hospital to be evaluated.

All five of the suspects were later arrested and charged with being outstretched in a subway station.
Report a correction or typo
Related topics:
new yorknypdhomelesssubway crimeu.s. & world
More Videos
From CNN Newsource affiliates
TOP STORIES