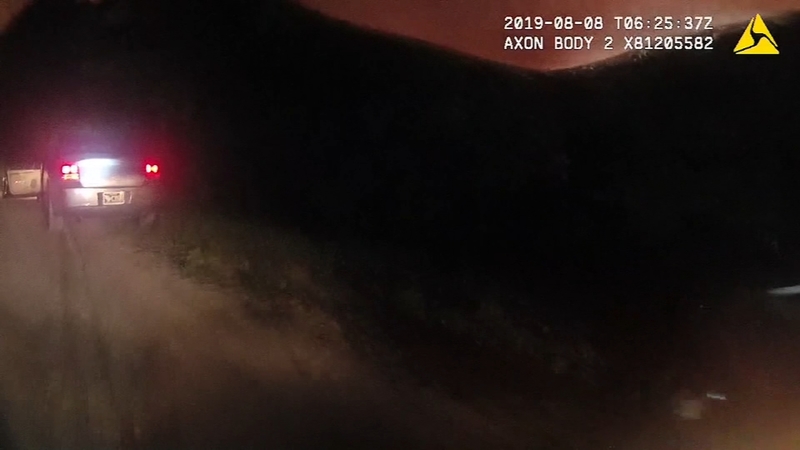 FLAGLER COUNTY, Florida -- A Florida woman was on a first date with a man when he refused to pull over for a traffic stop and decided to make a run for it instead.

Flagler County sheriff's deputies used stop sticks to disable a vehicle that fled a traffic stop in Palm Coast at about 2 a.m. Thursday, only to learn the driver bailed out into some woods.

He left his female passenger alone to face the consequences. She is not being identified because she's not charged with a crime.

"He didn't say anything to you other than I don't have a license?" asked the police officer.

"He don't have a license," said the woman.

The police officer then asked her if that's why he ran.

"He wasn't stopping," she said.

It turns out, the woman had just met the Orlando-area man on a dating website and had stopped at a Palm Coast Denny's for dinner on the way to her house.

When a deputy tried to stop the vehicle for a tag violation, the date told the woman he'd go to jail, so he raced off.

"He was exceeding the speed limit driving very erratically. She was very scared in the vehicle. She told us she didn't really know his last name, she knew him by two different first names," Flagler County Sheriff's Office Chief Chris Sepe told WESH-TV.

Law enforcement officials tell WESH-TV the same woman whose date went so wrong Thursday, was the victim in a different incident also involving a man last month. An incident that turned violent and was caught on camera.

In that instance, a man the woman was seeing, but trying to get away from at a Bunnell store threw himself on her vehicle, shattered her windshield and then attacked her when she got out, pounding her and knocking her unconscious.

In Thursday's incident, the suspect didn't hurt the victim but disappeared into the woods.

Investigators think he was running from more than just a suspended license.

"If he was saying he's bailing out for that reason, (it) would lead us to believe that maybe there's more in his background that he's hiding," said Chief Sepe.