Houston woman gets phone scam so threatening, she reported it to police 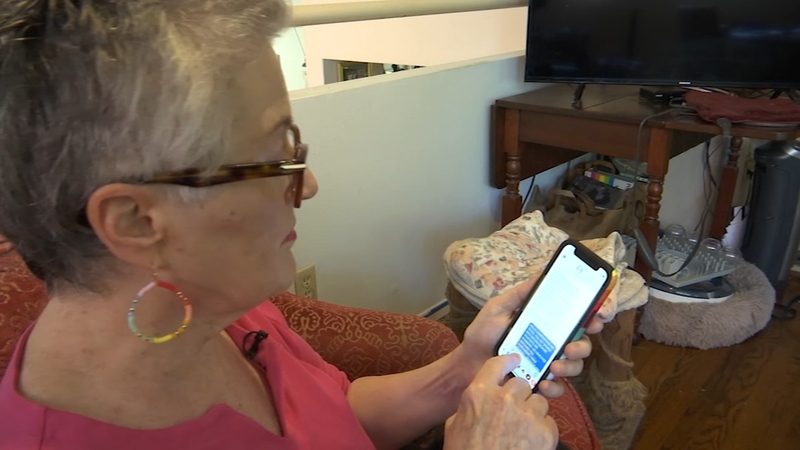 Woman gets phone scam so threatening, she reported it to HPD

HOUSTON, Texas (KTRK) -- A Houston woman received a threatening phone scam so alarming, she reported it to police.

ABC13 spoke with Cynthia Freeland on Thursday. She's a retired professor and said she received a phone call on Tuesday from an unknown number. She said normally, she doesn't answer those types of calls, but it was from a city where a relative lives.

"I was worried," Freeland said. "I answered the phone and it was silent for a moment and then this voice came on and said, 'I want you to listen carefully,' and then I hung up."

She later received a threatening text message saying someone was trying to kill her and demanded $25,000.

"My friend said, 'Call the police,' and I didn't know if it was important enough to, but I called them and they sent an officer right away," Freeman recalled.

Freeman filed a report with the Houston Police Department and showed Eyewitness News the text message as well as the case number.

"[The officer] said, 'It's a scam, you know, we're hearing a lot of these lately,'" Freeman recalled. "They use burner phones, and you can't trace them."

Freeman said she was scared and blocked the number as instructed then shared the story on a neighborhood app to warn others.

Leah Napoliello, the vice president of operations for the Better Business Bureau of Greater Houston and South Texas said some robocalls can be threatening, but it's indeed a scam, and people should not give any personal or sensitive information.

"We do get many reports of robocalls, especially from people saying that the scammer claims to be from a government agency," Napoliello said. "People get very frightened by that so they may want to pay the money to get this problem to go away, but this is really just an instance where some scammer is pretending to be an official in order to strike fear in you and get you to pay over the phone, and that's how they take advantage of people."

According to the Federal Trade Commission, in 2020, people lost more than $3.3 billion to fraudulent schemes, compared to $1.8 billion in 2019.

Phone and online scams are the top two most commonly reported.

Online shopping scams have become increasingly more common during the pandemic, according to the BBB. Customers between the ages of 18 and 54 are reportedly at a higher risk of falling victim to this scam.

"If you have been a victim of an online scam, too, it is important to inform law enforcement," Napoliello said. "Contact the FBI, the Federal Trade Commission, those entities so they can gather information and hopefully stop some of these scammers."

You can also report through BBB's scam tracker.

"Don't fall for it and tell the police about it," Freeman said, "Be confident that you're safe and you know take the right steps."