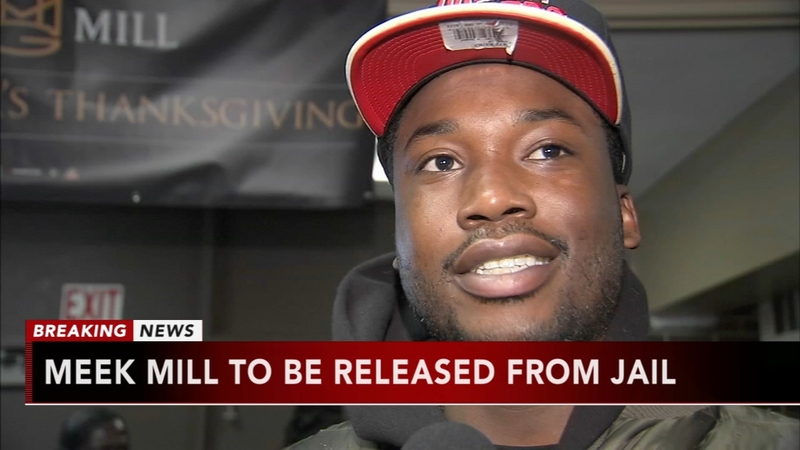 Meek Mill to be released from prison

The decree was handed down Tuesday afternoon.

Mill, whose given name is Robert Rihmeek Williams, was sentenced in November to two to four years in prison for violating probation on a roughly decade-old gun and drug case.

Several high-profile people have spoken out on Mill's behalf against the sentence, calling it harsh and unnecessary.

Earlier this month, Philadelphia District Attorney Larry Krasner visited Mill in prison and claimed the conviction should be tossed.

Mill issued the following statement regarding the release:
"I'd like to thank God, my family, my friends, my attorneys, my team at Roc Nation including JAY-Z, Desiree Perez, my good friend Michael Rubin, my fans, The Pennsylvania Supreme Court and all my public advocates for their love, support and encouragement during this difficult time. While the past five months have been a nightmare, the prayers, visits, calls, letters and rallies have helped me stay positive. To the Philadelphia District Attorney's office, I'm grateful for your commitment to justice - not only for my case, but for others that have been wrongfully jailed due to police misconduct. Although I'm blessed to have the resources to fight this unjust situation, I understand that many people of color across the country don't have that luxury and I plan to use my platform to shine a light on those issues. In the meantime, I plan to work closely with my legal team to overturn this unwarranted conviction and look forward to reuniting with my family and resuming my music career."

Mill's Lawyer said the following:
"We are thrilled that the Pennsylvania Supreme Court has directed Judge Brinkley to immediately issue an order releasing Meek on bail. As we have said all along, Meek was unjustly convicted and should not have spent a single day in jail. We are also pleased that the Pennsylvania Supreme Court has noted that Judge Brinkley may opt to remove herself from presiding over any further proceedings in Meek's case in the interests of justice. Meek is excited to be reunited with his family, and we, along with Meek, intend to continue to shine the light on a justice system in need of reform to prevent any other citizen from being put through what Meek has endured."
Report a correction or typo
Related topics:
entertainmentmeek millu.s. & world
Copyright © 2022 WPVI-TV. All Rights Reserved.
MEEK MILL
Meek Mill's conviction thrown out, granted new trial
Rapper Meek Mill becomes co-owner of Lids
Rapper Meek Mill surprises 3,000 kids with gifts
Harden ends JH-Town weekend with celebrity basketball game
TOP STORIES
Texas man said it was 'time to kill' election worker, records say
Laundrie claimed responsibility for Petito's death in notebook: FBI
Bundle up! Clear and cold night ahead
Bodies of 2 men found in apparent murder-suicide, HPD says
2 shot, 1 hit in head during home invasion on Houston's East End
Driver plows into hydrant, leading to NW Houston main break
Is is too late for the Ike Dike to be built?
Show More
Missing woman's cold case solved after car pulled from Brazos River
US confirmed 1st COVID case 2 years ago today
Police looking for 28-year-old in connection with teen's abduction
High school student attacked in his family's driveway in Richmond
Louie Anderson, Emmy-winning comedian, dies at 68
More TOP STORIES News