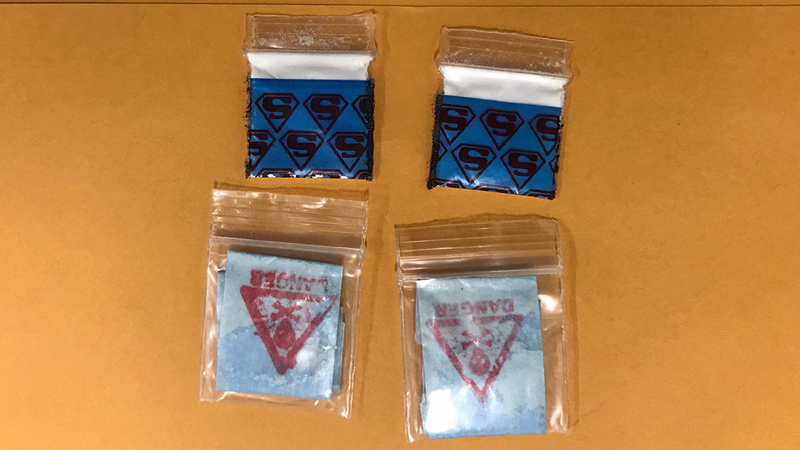 WEST BRANDYWINE, Pennsylvania -- Two counselors working at a facility to help recovering drug addicts were found dead from what appears to be a lethal overdose of heroin and fentanyl, the Chester County district attorney's office said.

It happened at the Freedom Ridge Recovery Lodge on Freedom Valley Circle in West Brandywine Township.

According to authorities, medics were called to the facility, which is a private residence used as a halfway house, around 2:15 p.m. Sunday.

The counselors were found unresponsive in separate bedrooms.

Authorities say it was the six residents, who are recovering drug addicts, who tried reviving the counselors using naloxone, commonly known by the brand name Narcan, but were unsuccessful.

Both counselors were pronounced dead at the scene.

In their bedrooms, investigators say they found used needles and heroin baggies. Some had the Superman logo, while others had a skull and crossbones with the word "danger."

In this photo released by the Chester County DA's office, the desk of a drug counselor who died of an overdose is seen.

District Attorney Tom Hogan said he knew something was out of the ordinary when he received a call about about a drug overdose on a Sunday.

"I said 'that's sad, but it's not that unusual. Why are you calling me?' And they said 'because it's the two counselors at the halfway house who overdosed and died,'" he said.

Toxicology tests for both counselors were positive for heroin and fentanyl. Authorities have recently warned of fentanyl, a substance much more potent - and lethal - than heroin.

"Anybody who sees baggies in the area with the Superman or 'danger' logo must be warned to stay away from these drugs. They appear to be heroin laced with fentanyl and are likely to kill anyone who uses them," said Hogan.

"We will not even let law enforcement handle them without special precautions because of the extreme danger of death or injury," he continued.

The halfway house is located in a rural community in western Chester County, something many neighbors protested before the permits were granted a few years ago.

We spoke with people who live nearby, many of whom say they have empathy for the recovering addicts. But they question the wisdom of running a facility like this in the middle of a residential area.

"The relapse rate - obviously we had two counselors who died. It's just crazy to have that in a residential area," said Greg Stilwell.

"I'm the oldest of five, so I have younger siblings, and I don't want my siblings to be out here playing and having people walking up and down the street. It's scary for me," said Adam Hickey.

Our calls to Freedom Ridge officials to comment were not returned.

Hogan said this incident is the latest example of how bad the opioid epidemic has become.

"The staff members in charge of supervising recovering addicts succumbed to their own addiction and died of opioid overdoses," he said. "Opioids are a monster that is slowly consuming our population."
An investigation into this case continues.