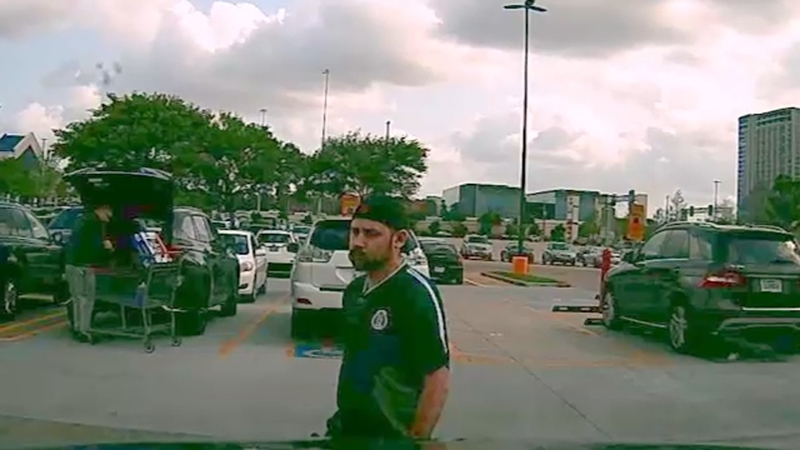 HOUSTON, Texas (KTRK) -- A former marine is glad to be alive after a frightening confrontation in a grocery store parking lot that was caught on his dash camera on Thursday.

It happened at 4:20 p.m. at Costco near Bunker Hill when Victor Santos noticed two babies inside of the car parked next to him with the engine running. As he was figuring out what to do, a man in a green jersey approached the car.

In audio captured from the camera, Santos asked the man, "You left your kids there?" According to Santos, the man didn't appreciate the remark, and as he was pulling out, the man smacked Santos' car and proceeded to pull out a gun.

"When I looked in my rear-view mirror, he was standing with his gun cocked and I just saw the flash go up, and I heard the pop, and my window shattered and I hit the gas and took off, " Santos said.

His rear dash camera captured the tense moments where the back windshield glass shattered and Santos taking off in the parking lot onto I-10 West.

When Santos called 911, he was put on hold. "All call takers are busy at this time," came the recorded message. A minute later, a dispatcher answered and Santos recalled what had just happened to him.

"A gun shot. He fired a shot at my Jeep and it shattered the whole back window," Santos is heard saying in the 911 call. The dispatcher then asked him if he needed medical attention and Santos responds by saying "I don't need medical. I just need a police out here."

Houston police arrived on scene and took photos, and got fingerprints on Santos' car where the man smacked the door with his hand.

With the dash camera video confirmation, police said they will be investigating this case as aggravated assault with a deadly weapon.

"I couldn't believe that's all it took to blow this guy up, I didn't do anything wrong," Santos said.