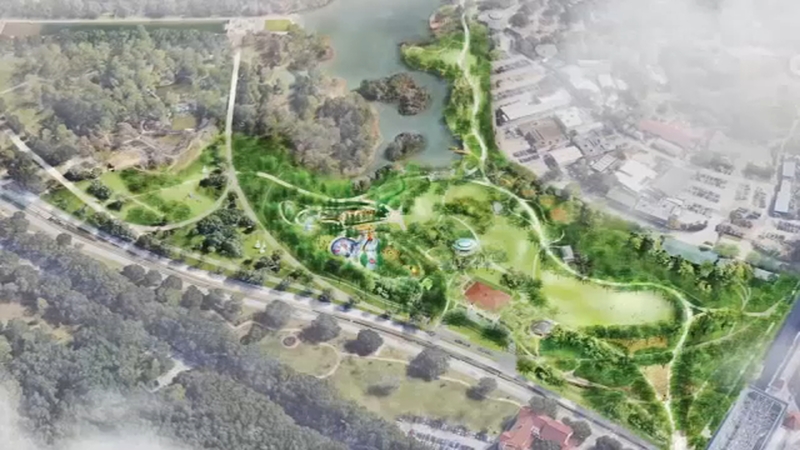 HOUSTON, Texas (KTRK) -- It's only been a few years since the completion of Hermann Park's last twenty-year master plan, which included beautifying the park's reflection pool to creating the McGovern Centennial Gardens. It was an ambitious project, but only the beginning for the Hermann Park Conservancy.

"When we finished the first master plan for the park, there were so many wonderful and improved things," said Hermann Park Conservancy President Doreen Stoller. "But there are a lot of things that still needed attention."

A new master plan is underway, and ground was broken on its first major project last week. The Commons at Hermann Park, which will take up 26 acres on the west side of the park, will create new playgrounds, nature habitats, and seating areas.

It will also feature a renovation of the Fannin Pavilion.

Houstonians who frequent the park are excited for the changes to happen.

"It'll be great to have a better environment for the kids," said Julia, who visits Hermann Park with her son.

Construction begins next week, and the majority of the area will be inaccessible until the project is expected to be completed, which is early 2024.

Current features of the area, such as the Buddy Carruth Playground for All Children, will be removed to make way for the new attractions.

The Hermann Park Conservancy will be continuing the legacy left by the Carruth Playground by making the new playgrounds accessible to all children.

The project's centerpiece, known as the Play Gardens, will contain play spaces that pay tribute to Houston's rich history. For example, "The Space Adventure" will have a large rocket ship slide.
There will also be a carousel in The Commons, which will serve as an additional entertainment option for a longtime Hermann Park staple.

"We run the little train that runs through the park, and we'll be adding a carousel," said Stoller. "(The carousel) will help us get income to maintain the park."

This isn't the only project currently taking place at the park.

The McWilliams Dog Park, which will be on the park's south side near Brays Bayou, is scheduled to open this fall.

Improvements to Hermann Park have been funded by the "Play Your Park" campaign which runs on private donations.