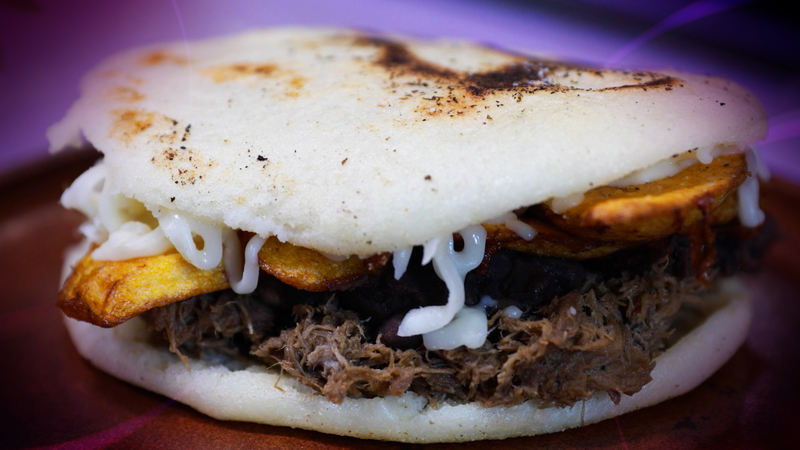 Masa brings more than dishes together -- cultures, too

SAN FRANCISCO -- Pupusas, arepas and gorditas -- while these three Latin American favorites share a common core ingredient, each represents the unique flavors and cultures of the countries where the foods were birthed.

Each of the dishes, distinct in flavor and presentation, is bound together by a corn flour dough called masa.

Victor Aguilera, a San Francisco-based chef and founder of Arepas en Bici , has been slinging the Venezuelan favorite out of his Nob Hill apartment since he was forced out of a restaurant job in March 2020 at the outset of the pandemic.

"In Venezuela, we call it the poor people's food, unfortunately," Aguilera said.

But there's nothing poor in taste or quality in his signature dish: the Arepa de Pabellon.

This arepa starts with a base of grilled masa and is topped with shredded beef, shredded cheese, beans and deep-fried plantains.

It's a combination Aguilera called a taste of Venezuela.

At the core of the dish are ingredients found in his native country, most notably the corn flour dough masa used in many Latin American cuisines.

"I prefer to use white corn flour. You can feel the difference in the taste and texture," he said as he demonstrated how quickly the dough comes together inside of his kitchen.

Aguilera has been making arepas since he was four years old, when he would make them with his father on Sunday mornings, sneaking one of the snacks back into bed with him.

He said he has enjoyed introducing Bay Area diners to a dish he considers a staple.

"It's very important to stretch the knowledge of what the masa is. Not only is it a gluten-free option, but there are so many things you can do with it: fry it, grill it," he said.

"When you think Latin American food, you think of Central America, which is tacos. So I think it's very important to keep showing this is a part of my culture. I'm going to keep it as traditional as I can," he continued.

A few blocks away in the heart of the Tenderloin, La Cocina Municipal Marketplace is home to a Salvadorian family making delicious meals with masa.

The food hall's Estrellita's Snacks, owned by Estrella Gonzalez, cranks out mouthwatering pupusas in the kitchen of this long-running woman-owned business.

"My grandmother started it in the Mission," said Angel Gonzalez, the third generation to be involved in the family business. "My grandmother taught everyone [to make pupusas] from my cousin to aunties, and now my mom teaches everyone."

To make pupusas, Gonzalez starts with a ball of masa that is patted down into a disc. The disc is then loaded with fillings like beans, cheese, veggies and meat, and then rolled back into a ball before being flattened down once again.

That's when the stuffed pupusas are ready to hit the greased grill.

"The pupusa is a special dish. It's the essential dish of the Salvadorian home. Most people will wonder where it is if you don't have it," Gonzalez said.

La Cocina is open weekdays for the lunchtime rush from 11 a.m. to 2:30 p.m. and boasts being the first women-led food hall in the country.

After serving a hungry crowd during the lunch rush, Estrella demonstrated the authentic way to enjoy a pupusa. Ditching the fork and knife diners are provided, she loaded the pupusas with red salsa and a customary blend of pickled cabbage slaw and dug right in with her hands.

As she ripped the warm pupusa open, she revealed a cheese pull, stringy enough to make a Gen Z food blogger rush for their smartphone.

She remarked in Spanish that while pupusas start with a masa base, they are still distinct from similar Latin American favorites, like the Mexican gordita.

"They are very different from gorditas because pupusas are closed and they don't have cream inside, and the Mexican gorditas are open," Gonzalez said.

Across the bridge in Oakland, gorditas are on the menu at Mi Zacatecas Mexican Food, and they are as authentic as they are large.

"We make our fresh handmade tortilla. The gorditas are handmade when you order," said Cecilia Chairez, owner of Mi Zacatecas Mexican Food.

Not only are the tortillas made fresh, but they are made with love. Chairez's mother, north of 80 years old, was visiting from the Northern Mexican state of Zacatecas and was helping in the kitchen.

"I always was in the kitchen with mom. Mama always cooked gorditas," she reminisced.

Chairez also makes her masa from scratch: first drying, then soaking and cooking the corn in a lime and water solution. The corn is then washed before grinding it into masa.

That dough then becomes the base of the gordita. The dough is also grilled, but with less oil.

Once the masa is cooked and begins to inflate, Chairez grabs it off the grill and creates a hole with a spoon and then a pouch in the dough where it inflated.

"We have a ground beef and potato that we call picadillo and papas. It's in a red sauce -- it's a favorite," Chairez said. "We always eat this food, so for me, I am able to show something that is so unique that I learned from mom so I can keep her tradition going."

She said while she sees more authentic Mexican restaurants in the Bay Area now than she did when she immigrated to the states in the 90s, none are serving authentic cuisine from the Northern Mexican state she calls home. Sharing this slice of her culture is important in keeping her traditions alive.

"What I tried to do most with my food is educate the people about the differences in Mexican food," she said.

Aguilera charges himself with a similar mission.

"I find it very important to follow these traditions to educate people on more [types of] Latin American food," he said.

"We hope that they are comfortable here and they can taste their home too," Gonzalez said. "They'll always find a little bit of El Salvador at Estrellita's Snacks."