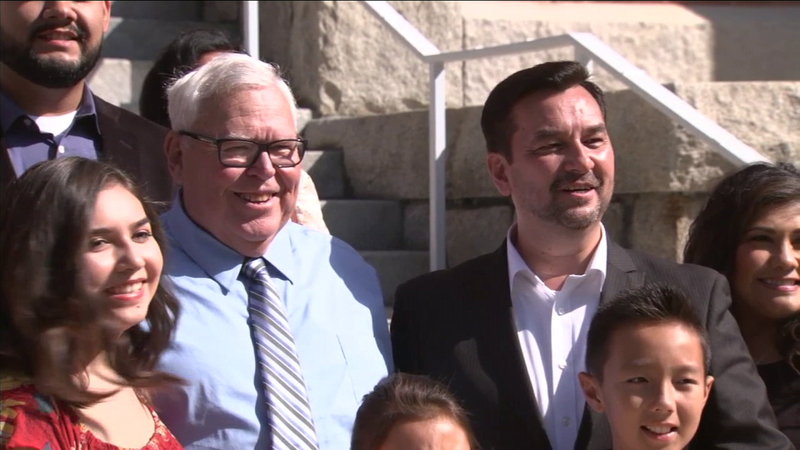 SANTA ANA, California -- As a Clerk-Recorder, Hugh Nguyen's duties include officiating weddings and keeping a public history of life events. But the 50-year-old, himself, was missing a part of his own past.

"I've been searching for my dad almost my whole lifetime," said Nguyen.

Nguyen was born during the Vietnam War. He says his mother always told him his father was an American G.I. killed in combat.

During the fall of Saigon, Nguyen, his sister and other family members escaped-eventually making it to the U.S., where they stayed in tents at Camp Pendleton until a sponsor found them a home in El Centro.

Nguyen worked his way up to become the first Vietnamese-American Clerk Recorder-but he always thought about his father.

"I just wanted to know the man, to hear his voice," said Nguyen.

Nguyen submitted his DNA to Ancestry.com more than two years ago. Just months ago, he learned he had a second cousin, who started asking around her family.

"She called me to ask me if I maybe had a son in Vietnam, said Roy Patterson, 70, of Cookeville, Tennessee. "At first I didn't think so."

Patterson, just 18 when he served in Vietnam, was already married. The U.S. Army Specialist 4 was stationed in Nha Trang, where Nguyen was born in 1967.

"He was born in Nha Trang, and with the dates, I decided it was time to do the DNA," recalled Patterson, believing there were just too many coincidences.

Nguyen received the results from Ancestry.com first by email.

Patterson, who owns a trophy shop in Cookeville, Tennessee, booked his flight to California before he even received the results. He said he felt so sure Nguyen was his son. Patterson said he told his wife, who supported him.

Patterson and Nguyen met privately at first, but in front of friends and family outside the Old Santa Ana Courthouse Friday, they read the official DNA results together.

"We are 99.99995 percent as Roy as my father," said Nguyen as he read the DNA report. "No room for error," added Patterson as Nguyen's friends and family applauded and cheered.

"He's truly awesome," said Patterson, as he put his arm around Nguyen's shoulder. "Amazing man, got a great family."

"I'm so happy to finally get to have a dad," said Nguyen. "He's really a nice person, has a big heart, a sense of humor. He kind of reminds me of me a little."

As they flipped through high school photos, the two noticed similarities. Both were pretty good at basketball.

Patterson admitted he's felt a range of emotion, from shock, at first, then guilt. "A lot of guilt to be honest with you, because I didn't know," said Patterson. "He went 50 years without a father and I don't like that kind of thing."

"I want to spend as much time as I can with him," said Nguyen.

Nguyen said he, his son, daughter and wife plan to travel to Tennessee early next year to meet his newfound family.

It will be a big reunion. Patterson has four children, 20 grandchildren and 20 great grandchildren, not counting Nguyen and his kids.

"All I can do is look to the future," said Patterson.