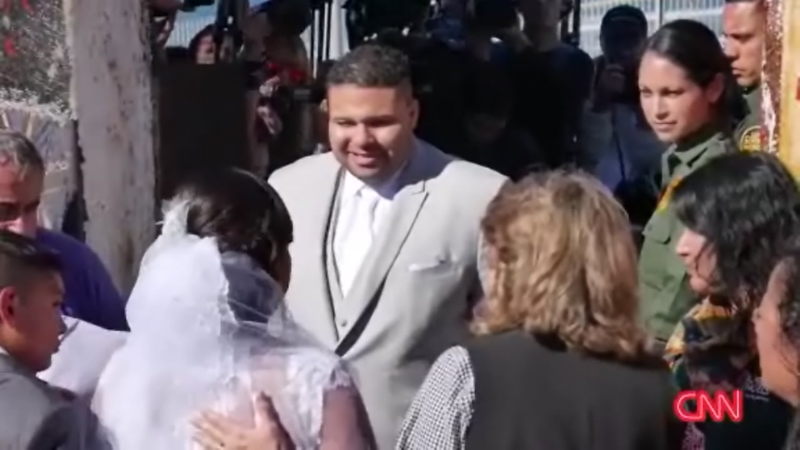 SAN DIEGO, California (KTRK) -- The bride gleamed as she smiled at her soon-to-be husband through a metal fence screen.

The wedding officiant was there, along with family members. Now all they needed was for U.S. Border Patrol agents to open the gates.

For the sixth time, agents participated in an annual event known as "Opening the Door for Hope," giving a select number of families the chance at a short reunion on Saturday.

Three minutes, to be exact.

Large groups of families stood grinning, some crying, peering through the screen at the family members waiting in Mexico, just mere feet away from their relatives in America.

As the red door was pulled between the U.S. and Mexico at San Diego's Friendship Park, an eruption of cheers.

Brian Houston was all smiles as he laid eyes on his bride-to-be, Evelia Reyes.

Border Patrol agents opened the gate in the border wall at noon for an hour, allowing waiting family members from the U.S. to walk partly through and meet and embrace relatives in Mexico for a scant three minutes each before tearfully saying goodbye.

Evelia Reyes, wearing a white wedding dress with train and veil, embraced Brian Houston of San Diego after signing documents that made them husband and wife.

Houston, a U.S. citizen, said he couldn't go into Tijuana for reasons he declined to explain but spoke daily with his bride. The couple has an attorney who is trying to obtain a green card for Reyes to join Houston in the U.S., Houston said, although that could take more than a year.

Young children dressed in their finest wedding attire smiled on as the wedding proceeded.

"It's a statement that love has no borders," Houston told the San Diego Union-Tribune. "Even though we are divided by a giant fence here, we can still love each other on both sides of the fence."

The bride and groom embraced, two hearts joined as one, but soon separated once again by the border.

You can read more about Opening the Door for Hope on the Border Angels' website.