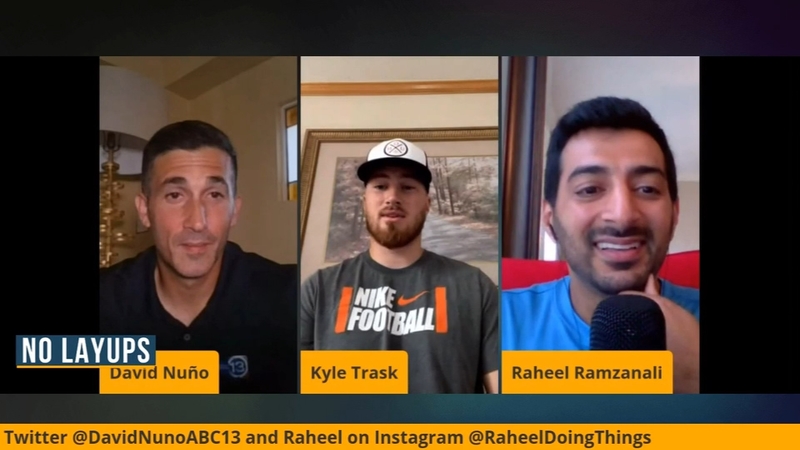 HOUSTON, Texas (KTRK) -- We are ready for some football on the "No Layups" podcast.

Trask will be one to watch in the draft, which you can catch starting Thursday at 7 p.m. on ABC13.

Trask, who was a fifth-year senior at the University of Florida, is a star quarterback, but he wasn't always in the national spotlight.

On New Year's Eve in 2020, he made it official that he would decline returning to school in favor of declaring eligibility for the NFL Draft.

Along with Trask, the guys will also breakdown more of what to expect from the three-day event, which is returning to an in-person format this year.

Due to the pandemic last April, it went all virtual.

Now high-fives and hugs are back on the table, so says NFL Commissioner Roger Goodell, who is fully vaccinated. He'll be hosting the festivities in Cleveland instead of from his basement mancave.

Read up on what to expect as the NFL seeks a return to normalcy for the draft this year.

Did you think we forgot about our favorite comic book superheroes and warriors? Never!

That's why the guys will also be talking about the Disney+ series "The Falcon and the Winter Soldier" (that finale, though!) and discussing "Mortal Kombat."

The love for the game of football runs deep in the Trask family. Hit play to hear more about Kyle's Trask's biggest inspiration.

You can watch the podcast in the video player above or on your favorite streaming devices, like Roku, FireTV, AppleTV and GoogleTV. Just search "ABC13 Houston."