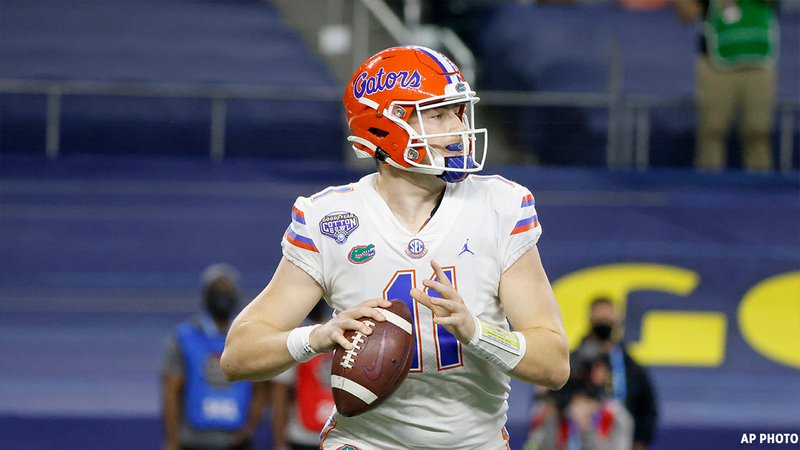 MANVEL, Texas (KTRK) -- A star quarterback who grew up in Manvel is one of four finalists for the 86th annual Heisman Trophy, known as the most prestigious award given to a student-athlete in college football.

Kyle Trask, a fifth-year senior at the University of Florida, is up for the award in a class that includes Alabama quarterback Mac Jones, Clemson quarterback Trevor Lawrence, and Alabama wide receiver DeVonta Smith.

But Trask wasn't always in the national spotlight.

And like King, Trask would also find himself at a Florida school, joining the Gators as a backup in 2016.

He got his first start since high school in September 2019, after Florida's starter Feleipe Franks suffered an injury during their game at Kentucky.

Since then, Trask has shined on the field, though his high school coach Kirk Martin will easily tell you Trask is a star off the gridiron, too.

INTERVIEW: "He's the most loyal person I know." Manvel's football coach describes Kyle Trask as "an unbelievable human." Here's why the Heisman Trophy finalist is getting so much praise.
EMBED More News Videos

"He's the most loyal person I know." Former Manvel backup quarterback Kyle Trask is a Heisman Trophy finalist. ABC13 talked to one of the people who know him best.

BIO:
The NCAA transfer portal was made for guys like Trask, a career backup looking for a better opportunity elsewhere. But Trask never considered moving on despite spending most of his high school and college careers waiting in the wings. He stuck it out in Gainesville and ended up with a record-setting senior year, his first as a full-time starter. He finished with 43 touchdown passes, breaking the school's single-season mark (39) set by 1996 Heisman Trophy winner Danny Wuerffel, and ran for three more. Trask could become the fourth Heisman-winning QB in school history, joining Steve Spurrier (1966), Wuerffel and Tim Tebow (2007).

KEY STATS:
His 43 TD passes lead the nation by 11 and are tied for the eighth-highest total through 11 games in Bowl Subdivision history. Trask threw four or more TD passes in each of Florida's first six games this year, making him the first player in SEC history and fourth FBS quarterback since 1996 to accomplish the feat.

BEST GAME:
He became the Heisman front-runner against resurgent Arkansas in mid-November, when he completed 23 of 29 passes for 356 yards and six touchdowns in a 63-35 beatdown that made the Gators look like legitimate national championship contenders.

BEFORE COLLEGE:
He was the 124th-ranked quarterback coming out of high school in 2016. Trask grew up in Manvel, Texas, and his parents were such diehard Texas A&M fans that they named their son after Kyle Field. Trask never got a sniff from his beloved Aggies. He landed at Florida almost by accident and was buried on the depth chart behind Austin Appleby, Luke Del Rio, Franks and Malik Zaire.

Trask is widely considered a late first-round draft pick who could slide into the second. His decision-making ability and accuracy are his top traits, but his lack of mobility will likely have him selected after Clemson's Trevor Lawrence, Ohio State's Justin Fields and BYU's Zach Wilson and possibly behind Alabama's Mac Jones and North Dakota State's Trey Lance.

THE SKINNY:
Even when it looked like Trask would get his chance in 2018, he broke a foot in practice days before the game and had to extend his wait. It wasn't until Franks' season-ending ankle injury in 2019 that Trask finally made his way onto the field. He quickly proved he belonged. He really shined this season, leading the nation in passing yards (375 a game) and touchdowns. His only downside: The Gators closed with a three-game losing streak that ruined any chance they had of winning a national championship.

Trask made his future plans official on New Year's Eve, formally announcing he's declining an opportunity to return to school in favor of declaring eligibility for the NFL Draft.


You can watch the virtual Heisman Trophy ceremony on ESPN at 6 p.m. Houston time. An official watch party to cheer on Trask in hopes he receives that hardware will be held at Honore's Cajun Cafe located at 19430 Highway 6, across the street from Manvel High School. That will start at 5:30 p.m.