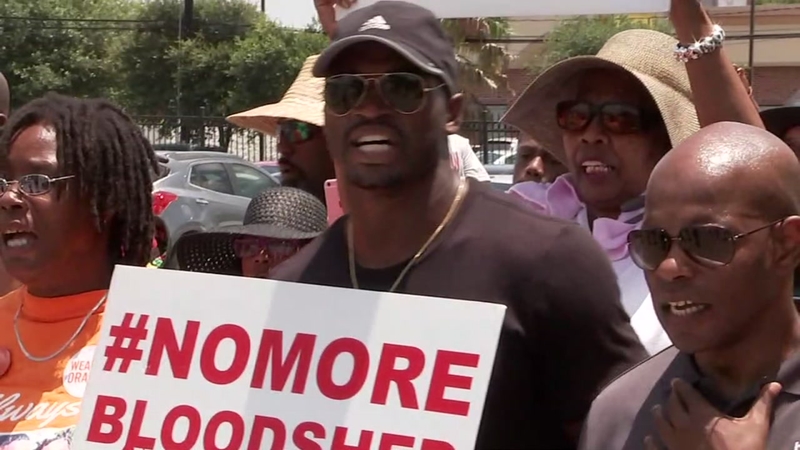 HOUSTON, Texas (KTRK) -- A march through Sunnyside in southeast Houston was held today in wake of two young children shot by random gunfire.

Sir Romeo Milam, 3, remains hospitalized after a bullet pierced the wall of his family's apartment. It came from a gunfire exchange in the complex courtyard.

Tristan Hutchins, 8, was killed during a drive-by shooting on the street where he lived.

Among those marching today was former Vikings running back, and now, NFL free agent, Adrian Peterson. Eleven years ago, his brother Chris, 20, was shot and killed after he gave a man a ride.

"There are families out here that feel the same pain I feel, and obviously my (other) brother and mother. You always have that void to deal with," Peterson said.

Community organizer Deric Muhammad was one of the organizers of the march.

"Where we stand right now is billed as one of the most dangerous neighborhoods in America," he said.

The marchers walked on Cullen Boulevard, with the apartment complex where the 3-year-old was shot last week as the end point.

"You can't expect black lives to matter, unless they matter to us," Muhammed said.

Families of those who lost loved ones to violence in the neighborhood marched as well.

Among them was Shania Donaldson, whose brother was murdered.

"He was on the right track, he was a father, and doing something with his life," Donaldson said. "How could you do that to a person, not knowing what you're taking away?"
Muhammad urged people to pay attention to 'young people' this summer.

"If you don't have a summer program in your neighborhood, create one," he said. "Be a mentor to a child and set an example."

Gun violence has taken a toll on the entire region, as seen in Santa Fe.

"When you take a life, it takes life out of a community," Muhammed said. "But for the person who did it, it also takes part of their soul."

Milam underwent his sixth surgery Friday afternoon. Peterson says he will also pass out 100 bags of groceries during his peace walk.