Woman turns to abc13 for help dealing with neighbor's dogs 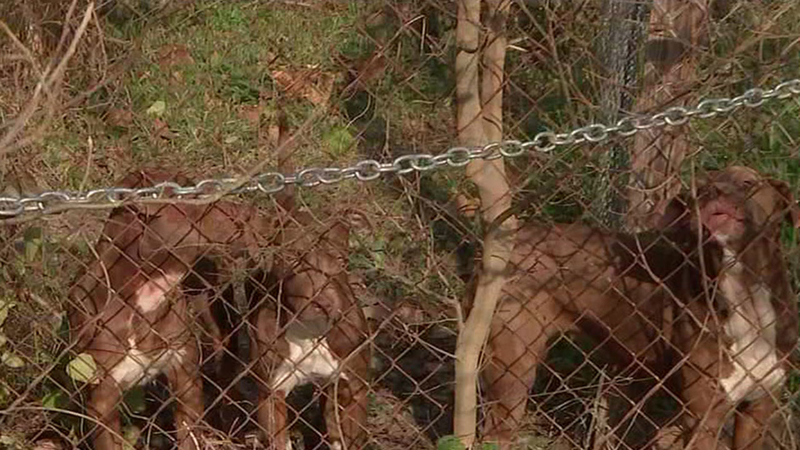 Woman turns to abc13 for help dealing with neighbor's dogs

HOUSTON (KTRK) -- A northeast Houston woman says she's fed up and afraid because her neighbor's pit bulls keep getting into her yard. Alice Murray says she's called the police and animal control, but says nothing seems to have worked. So she called us.

"I come out of my house to go to my garbage can and here are two pit bulls growling at me. that scared me to death. And I'm back up praying Jesus and backing up in my house so the dogs won't bite me," Murray said.

She has lived in her northeast Houston home for 47 years.

"I don't have no business worryin bout no dogs," Murray siad.

She says when the dogs got out last week they killed another dog that had made its way into her yard. This week, a pit from the house behind hers jumped the fence into her yard, and then into the yard in question. Houston BARC says that dog got caught on the chain itself. Murray tells us she watched as her neighbor's pits attacked the hanging dog.

"Animals were doing what animals do. She got two puppies back there. She protected her puppies. It's not our problem the dog got caught on the chain," neighbor Lynn Randle said.

"They ain't no puppies. I saw a puppy kill a dog in my back yard, pulled his intestines out while the dog was still walking alive," Murray replied.

Houston police say they've had two calls for service to Murray's home. They found that dead dog on the first call. Her neighbor's nephews say it's not as bad as she says.

"We're here 24/7. If they get out, they get out the front and we catch them and put them right back up," Randle said.

She called Houston BARC and they showed up while we were there. They cited the owner for not having a city license for the dogs and not having them vaccinated. But while the dogs are still there, she worries for the kids on their street.
Related topics:
houston
Copyright © 2021 KTRK-TV. All Rights Reserved.
TOP STORIES
153 Houston Methodist workers out of job after vaccine protest
Roommate of woman accused in 5-year-old's death now charged
HISD hosting phone bank to get 938 students to return to school
Woman believes iPhone function saved her life during an attack
TX EquuSearch founder hospitalized due to serious health condition
Super steamy with scattered downpours through Friday
Thieves steal 20 catalytic converters from La Porte dealership
Show More
6-year-old boy hit by stray bullet at his home in N. Harris Co.
Bumble just gave its entire staff the week off to recharge
WATCH: ABC13 town hall explores how to protect LGBTQ+ youth
Body found confirmed to be missing Houston tattoo artist
Pct. 4 Constable Deputy rescues kitten thrown onto highway
More TOP STORIES News