Tenn. Woman Recounts Terrifying Escape From Wildfires: 'It Was Like a Meteor Shower' 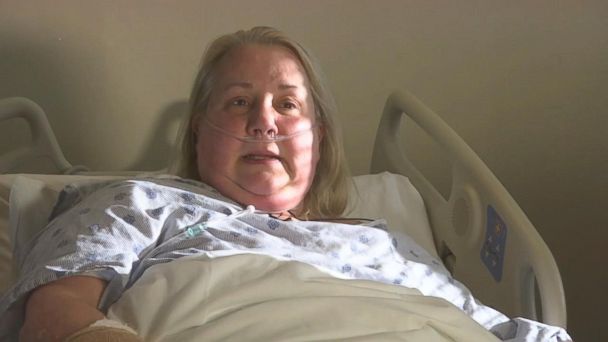 From her hospital bed, Debbie Brooks recounted her narrow escape from the wildfires that destroyed her home and devastated her Tennessee community.

The Gatlinburg, Tennessee, resident spoke to ABC affiliate WATE on Thursday in her room at the University of Tennessee Medical Center in the city of Knoxville.

"I don't think anybody down below knew how bad it was up above," Brooks told WATE of the blaze that consumed her home Monday evening.

"Flames started shooting out from all around," she said. "And then the storage room ceiling collapsed, and the main beam of the house came through it."

Brooks said she immediately grabbed her dog and two cats before sprinting to her car.

"Put it in gear in reverse and just slammed through the garage doors," she said.

In a panic, Brooks flipped the car, WATE reported.

Brooks said that she then called 911, but claimed the operator who responded told her no one could get to her.

"I said, 'That's nice for you to say, but I'm going to die if somebody doesn't get up here,'" Brooks told WATE.

Judy Tucker, the communications director for Sevier County's E911 Central Dispatch Center, told ABC News today that she was still in the process of locating audio of the 911 calls that Brooks made. She declined to provide any further comment.

Brooks told WATE that she waited for help for five hours. During that time, she was was pelted by golf ball-sized embers in the air.

"It was like being involved in a meteor shower," she said. Brooks added that she tried to shield her pets and suffered third-degree burns to her arms as a result.

However, Brooks' dog named Jelli somehow got away. When police arrived, they told Brooks she had to leave her dog behind, WATE reported.

The Gatlinburg Police Department could not immediately be reached for comment.

She added that Jelli was "the sweetest dog."

Despite the pain of losing her beloved pet, her home and personal belongings, Brooks said she was incredibly thankful for the support and help she has received. She noted that several hospital staff members donated much-needed clothes to her.