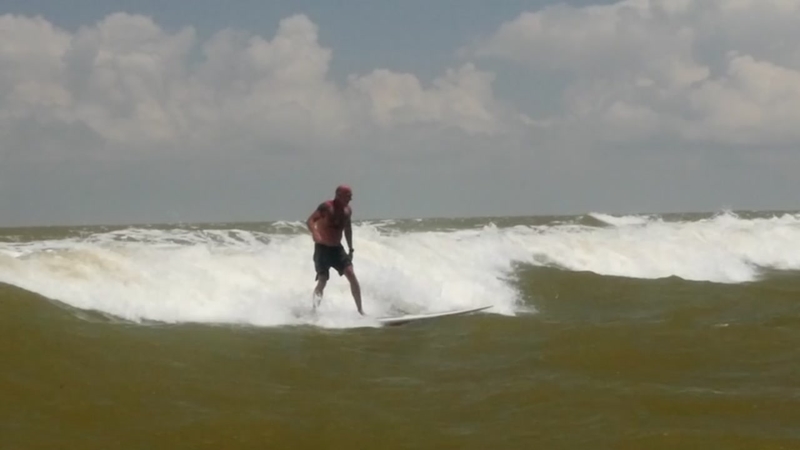 GALVESTON, Texas (KTRK) -- Every time Jimmy Buffett is in town, he visits the Houston Ship Channel for a surprising surfing experience.

He's in Houston again this weekend, with a concert Saturday night at Cynthia Woods Mitchell Pavillion, and many fans are curious whether or not he'll be spotted hitting the waves.

ABC13's Pooja Lodhia embraced her inner Jimmy Buffett and took on the sport herself.

You don't have to travel to California or Hawaii to surf the waves. In fact, you don't even need a beach at all. Professional long board surfers found a way to ride for miles in Galveston Bay, by surfing waves that large tankers generate in the ship channel.

This was the moment where maybe we should've turned back. We're miles from shore, somewhere in the Galveston Bay, desperately scanning the horizon for massive tanker ships. What did we get ourselves into?

James Fulbright first discovered tanker surfing 20 years ago. It's always been a kind of urban legend.

"I heard about it through a couple of sailors who had swamped their sailboat," said Fulbright. "They said, 'Oh, it's a ship wave.' And the moment they said that, my brain turn on as a surfer like, oh I heard something about that years ago."
The idea is to follow a tanker, and surf its wave. I probably should've taken a lesson before getting in.

"They say in Texas we have enough waves to make surfers, but not enough to keep them happy," said Galveston Beach Patrol Chief, Peter Davis.

Davis has been surfing for most of his life. For him, these 100,000 ton ships create an almost religious experience.

"It's weird because when you surf on a beach wave, whether it's Galveston or west coast or whatever, you're talking about maybe a couple, three, five seconds," said Davis. "In one wave, you'll find as much time on your feet as you would in a year."

The problem with the day we went out - and honestly, with most days, is the weather. It can't be too foggy or too choppy. We experienced both extremes.

"There was a fog advisory, so it completely shut down the channel down, no ships," said Fulbright.

However, after about five hours in - we found a glorious wave, about eleven miles per hour. Peter rode the swell for more than a mile!