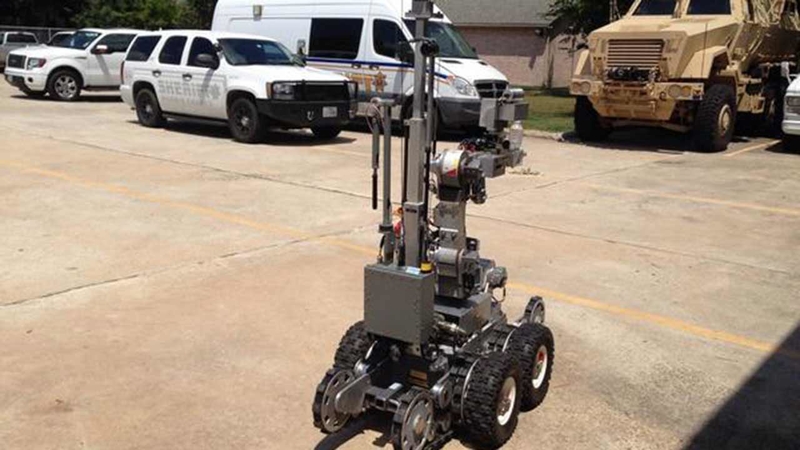 HOUSTON (KTRK) -- From bomb scares to suspicious packages, standoffs and search warrants, first responders are faced with some dangerous situations. When they call for backup there is often a man of metal first in line.

Deputies say they don't have a code name for the robot they call on, "Everyone says what's the name? We haven't figured that out yet." Mason adds, "It's nothing fast," but says it's not about speed but reliability and accuracy.

The robot is used for everything from checking out unknown situations to picking up small objects and even dragging big ones. Mason says, "It can drag a person. Up to 200 pounds."

It may look like a metal machine full of intricate parts but Mason, who operates it remotely, says "It is not delicate. It will do its job."

The Harris County Sheriff's Office says there is really no way to measure just how many lives have been saved and how many injuries prevented by using the device across the region. It was a key tool during the long standoff with accused Stay family killer Ronald Lee Haskell. He was seen putting a gun to his head several times.

Responders say the robot is very passive and can move in close to a scene instead of putting a deputy at risk.

Something as simple as handing off a bottle of water to a thirsty suspect can help diffuse a situation.

Tullos adds, "I would like to think it has a calming effect to them so they don't think they are pressured into doing anything versus an armed deputy coming forward."

In a massive weapons raid at a northwest side home in July the SWAT team used the robot to check for anyone hiding and anything explosive.

Deputy Mason says he never expected his partner in crime to be a robot adding, "It's sort of like a cartoon, two dimensional" and adding on a lighter note, "I wouldn't be surprised if my 12-year-old kid can run it better than I can."

The departments who use the tool say they are always expanding the robot's capabilities and learning new benefits of having it in the department. Mason says it makes him feel good to help get important questions answered while keeping his fellow first responders safe.

There are only two men trained on operating the robot right now but with the demand across the county two more are being trained to operate the "SWAT-Bot" on scenes.