HOUSTON, Texas (KTRK) -- A 12-foot-high fence that some Fifth Ward neighbors describe as a wall will be cut down to size Friday, according to the city's public works department. It will then be just under eight feet high, which doesn't require a city permit.

But that's just the latest development in an ongoing dispute between Mt Corinth Church and its neighbors on the other side of the fence.

Arthur Smith leases the building next to the church parking lot. On the side of his building wall is a mural encouraging voter registration. Next to that is his T-shirt business. Smith complained that the wall blocked his mural and posed a safety hazard, providing a blind spot for drivers and people on the sidewalk. 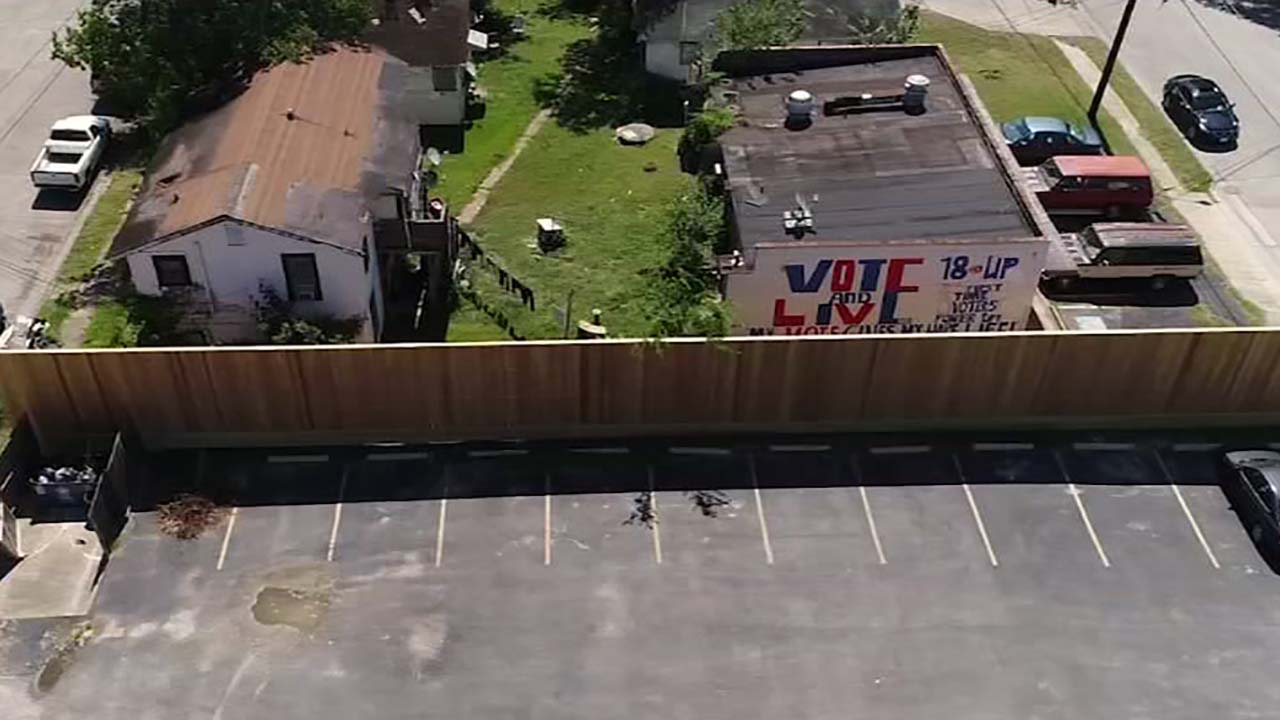 Business owner upset with church over fence
A few weeks ago, a fence was built on the perimeter of Mt. Corinth Church in Houston's Fifth Ward.

Smith took to Facebook Live, documenting what he saw as the issues. When he received no response from the church, he called the city. Ten days ago, inspectors arrived and cited the church for the over-height fence, illegal parking signs and a church activity building that didn't have permits on file for a recent remodeling.

During a Wednesday Facebook Live video, Smith accused someone of removing the "red tag" city violation notices. From the sidewalk, he and his wife once more criticized the church -- and the wall that they expected would have been removed already. In late May, the pastor's attorney said everything would be worked out within a couple of days.

While on the sidewalk, the couple was approached by an off-duty HPD officer who works an approved off-duty security job at the church. In the video, he asks Smith for identification. Smith refuses, stating that he's doing nothing wrong and is on a public sidewalk. The officer asks Smith to stop. Smith walks away.

A taser was deployed moments later as Smith's wife screamed. He was still able to run to his business next door, where he refused to come out. A team of HPD officers including a mental health team assured him he would not be hurt. Smith was later taken into custody without incident, treated at a hospital for the effects of the taser and then booked into jail on a charge of evading arrest.

"We were doing nothing wrong," said Darlene Koffey Smith. "We're for the community."

Smith remained in jail overnight and through much of the day. His wife did not know when he'll be released.

Late Thursday, a Houston Public Works spokesperson said church representatives told inspectors the fence would be cut down to a height that requires no permit. The wall will stand, but not tower over its neighbor.

Arthur Smith was not available for comment, and the pastor has not spoken publicly about the issue or the reason for the fence.

But Oscar Phillips, a longtime resident who works two doors down from the fence, sees its reduction as a hopeful sign.