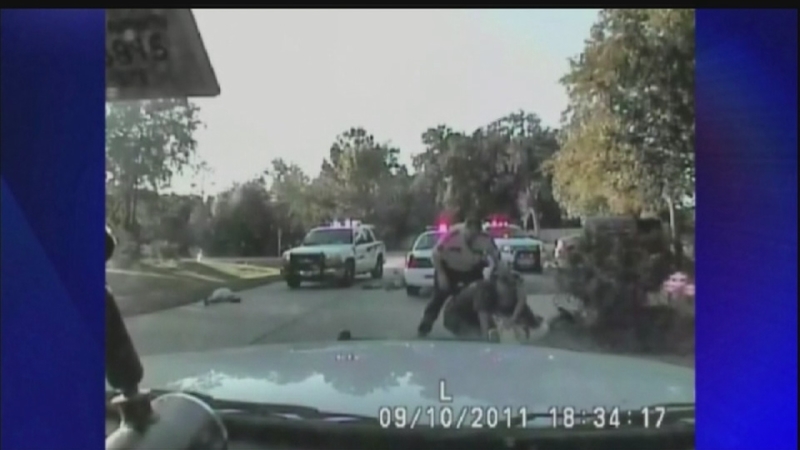 HOUSTON (KTRK) -- A judge has thrown out official oppression charges filed against a former Harris County deputy constable. The judge ruled the statute of limitations on the case had run out.

Eyewitness News obtained video of the alleged incident even before prosecutors knew about the case. Former Harris County Deputy Constable Jimmy Drummond can be seen in that video from a 2011 traffic stop, allegedly kicking a man in handcuffs on the ground. Prosecutors say they filed a criminal complaint on the case within days of finding out about it in September 2013. He wasn't indicted, though, until December 2013, three months after the two year statute of limitations expired.

"I don't believe it was any fault of the state's, do you understand? This case just came so close to the statute of limitations I believe it was just no error of theirs," says Drummond's Attorney Sam Cammack.

Attorney Randall Kallinen, who represents the man who was in handcuffs and was on the ground in the video, blames the district attorney's office saying they "screwed up."

Prosecutor Julian Ramirez characterizes the dismissals as procedural and insists they had nothing to do with the evidence. He says the district attorney's office now must decide whether to appeal the ruling, telling us, "It's disappointing. We have a great respect for the court and understand that the court made the ruling that she believed was required by law. Nonetheless it's disappointing to us and we're looking at our options as far as an appeal."

Drummond could have been sent to jail for up to a year if convicted. He had been placed on administrative leave while under indictment. His attorney expects him now to be reinstated.
Related topics:
officer charged
Copyright © 2021 KTRK-TV. All Rights Reserved.
TOP STORIES
Judge blocks Abbott's order to pull over vehicles with migrants
Conroe PD sued over arrest that 'destroyed' life of former teacher
LyondellBasell survivor still in hospital 'covered in burns'
Woman sentenced after arranging kidnapping of cousin killed by FBI
CDC issues new eviction ban for most of US through Oct. 3
Here's when some of you could get a humidity break
2 more Houston lawmakers arrested in DC during voting rights protest
Show More
Bolivar Peninsula fisherman reels in 110-inch shark
Big 12 reportedly looking at Pac-12 partnership
Business is booming in Houston's East End and here's why
Texans have reached critical moment in COVID-19 fight, doctors say
34-year-old suspect's bond revoked in road rage murder of teen
More TOP STORIES News