Israel, Hamas to Halt Attacks for 5 Hours for Humanitarian Aid 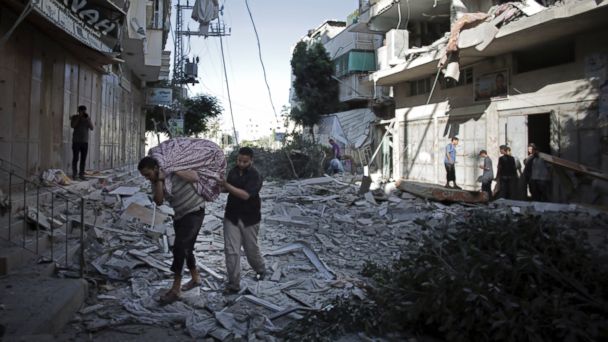 Israel agreed today to halt its attack on Hamas targets in Gaza for five hours on Thursday to allow residents of Gaza to get food and other humanitarian aid.

Israel agreed to suspend its attacks after the United Nations appealed for a break in the violence for humanitarian reasons. Hamas also agreed to participate in the ceasefire.

Israel said it would stop its aerial and naval bombardment of Gaza sites starting at 10 a.m. local time Thursday (3 a.m. ET) and that its suspension would last until 3 p.m. (8 a.m. ET)

"This humanitarian window is meant to allow the civilian population of the Gaza Strip to engage in resupply for their humanitarian needs," a statement from the Israel Defense Forces stated.

"Should the humanitarian window be exploited by Hamas or other terror organizations for the purpose of launching attacks against Israeli civilian or military targets the IDF will respond firmly and decisively," the statement said.

Everything You Need to Know About the Conflict

Israel also warned that residents of the towns Beit Lahyia, Shuja'iya and Zeitoun - who had been warned by Israel to evacuate their homes for their own safety - should not return after 3 p.m.

The willingness of Israel to halt its attack came after four Palestinian boys playing on a Gaza beach were killed by Israeli fire. Israel, which has contended that Hamas hides its rocket launchers and arsenals in populated areas, said it would look into the circumstances of the boys' deaths.

President Obama said today that "we've all been heart broken by the violence" that has "men, women and children caught in the crossfire."

The president said the U.S. "will use all of our diplomatic relationships to support closing a deal on a ceasefire."

There was no indication today that Israel or Hamas, the militant group that controls Gaza, were willing to agree to a permanent ceasefire that had been proposed by Egypt earlier this week. Israel had halted its attacks for several hours earlier this week, but resumed its military campaign after Hamas fired dozens of rockets at Israel.

An additional 8,000 Israeli military reservists were called up today, Israel announced. They will join the 40,000 reservists that have already been called up, with many of them poised along with tanks on Israel's border with Gaza.

And a senior Hamas official announced that the Islamic militant group has formally closed the door on the Egyptian proposal for a cease-fire aimed at ending the conflict with Israel.

International officials, including Secretary of State John Kerry, seemed hopeful that the peace deal could still work even after Hamas ignored the cease fire proposal Tuesday and continued to fire rockets at Israel. Israel responded after a six hour break with a fresh barrage of aerial and naval attacks at what they called terrorist sites.

Sami Abu Zuhri said today in a text message to The Associated Press that the group "informed Cairo today officially that we don't accept the proposal they made."

The death toll in the nine-day slugfest reached 214, all but one of them Palestinians, many of them civilians and children, according to Gaza health officials. At least 1,550 people have been injured in Gaza since fighting broke out last week, the health officials said.

Tens of thousands of Gazans have fled their homes after Israeli leaflets and robo calls to their homes urged them to evacuate their homes.

"The evacuation is for your own safety," the leaflets read. "You should not return to the premises until further notice. Whoever disregards these instructions and fails to evacuate immediately, endangers their own lives, as well as those of their families."

Israeli Prime Minister Benjamin Netanyahu said Tuesday that Hamas, the militant group that controls Gaza, would pay a price for rejecting the ceasefire and launching more rockets at Israel. "Our answer is fire."

The battle has broken a two-year lull in hostilities between Israel and Hamas and was triggered by the slaying of three Israeli teens and revenge burning death of a Palestinian teen. Angry protests escalated to rocket launches and retaliatory air strikes.