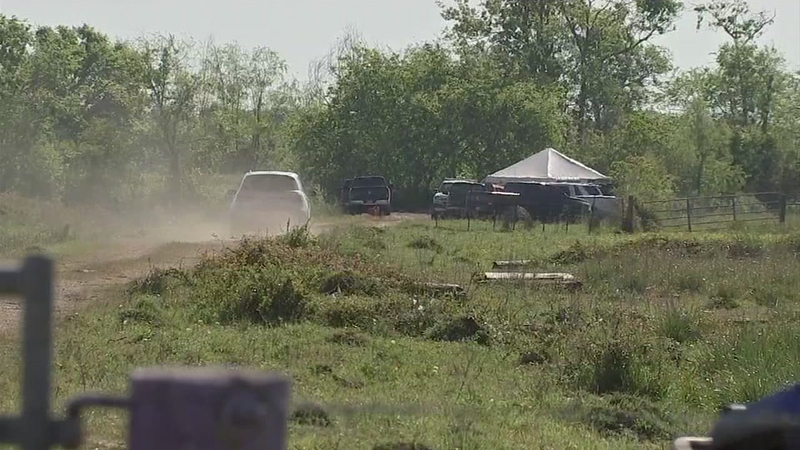 ROSHARON, TX (KTRK) -- Texas Rangers confirm human remains have been found at a dig site in Brazoria County. It's the second set of human remains found with a suspected serial killer's help.

The latest discovery was just off Hwy 288 north of Angleton. Police placed red flags in the ground marking the area where they found remains. They sifted through dirt using small tools.

William Reece, a convicted rapist and kidnapper, suspected of murders in two states, has been out of prison on a bench warrant, leading authorities in their search for two young women who went missing in 1997. He has long been linked to the disappearances of Jessica Cain, 17, last seen in La Marque and Kelli Cox, 20, a young mother from Denton, Texas.

Tuesday, Texas Rangers confirmed human remains were discovered last Friday at the Brazoria County site where they were searching for Cox. Last month, crews found human remains at a site on East Orem in southeast Houston where Reece, according to sources, told investigators he buried Cain.

Police believe Reece used stolen construction equipment to bury the bodies. Both sets of remains have been sent the University of North Texas forensics center for identification.

Cox's mother still lives in North Texas where she has always hoped her daughter would someday walk through the door.

"I do want those answers," said Jan Bynum. "Whatever they are and if they think this is Kelli and she's gone, I want this journey to bring some sort of good."

She said police notified her of the discovery and warned her weeks ago about this possibility.

Meanwhile, Reece has once again retained a lawyer. Attorney Anthony Osso will represent him. Osso has previously represented Reece in other cases.

This isn't the only big case that Osso is working. If his name sounds familiar to you, that may be because he also represents Shannon Miles, the man charged with murdering Harris County Sheriff's Deputy Darren Goforth last year.

Anjanette Sorrentino says she was raped, beaten, choked and left for dead.

Anjanette Sorrentino says she was raped, beaten, choked and left for dead.

Bryant says her daughter barely survived after she allegedly was captured in June 1997 by William Reece. During her attack, Ajanette said she witnessed Reece get angry with another man, an accomplice named "Joey" who has not been identified.

We obtained a copy of a sketch that police are using in their investigation. The Oklahoma State Bureau of Investigation is also looking into the case.

"He slit that boy's throat and she said he fell to his knees and he fell backwards, and she said blood went all over," said Bryant.

There was 12-year-old Laura Smithers. She was found dead. Then there was Kelli Cox and in August Jessica Cain went missing too.

Then there's Sandra Sapaugh, a young woman who survived Reece's attack that very same year. She testified in court and Reece was sentenced to 60 years behind bars.

It's the only case he's been convicted for.