Haunting image of Syrian boy rescued from rubble in Aleppo 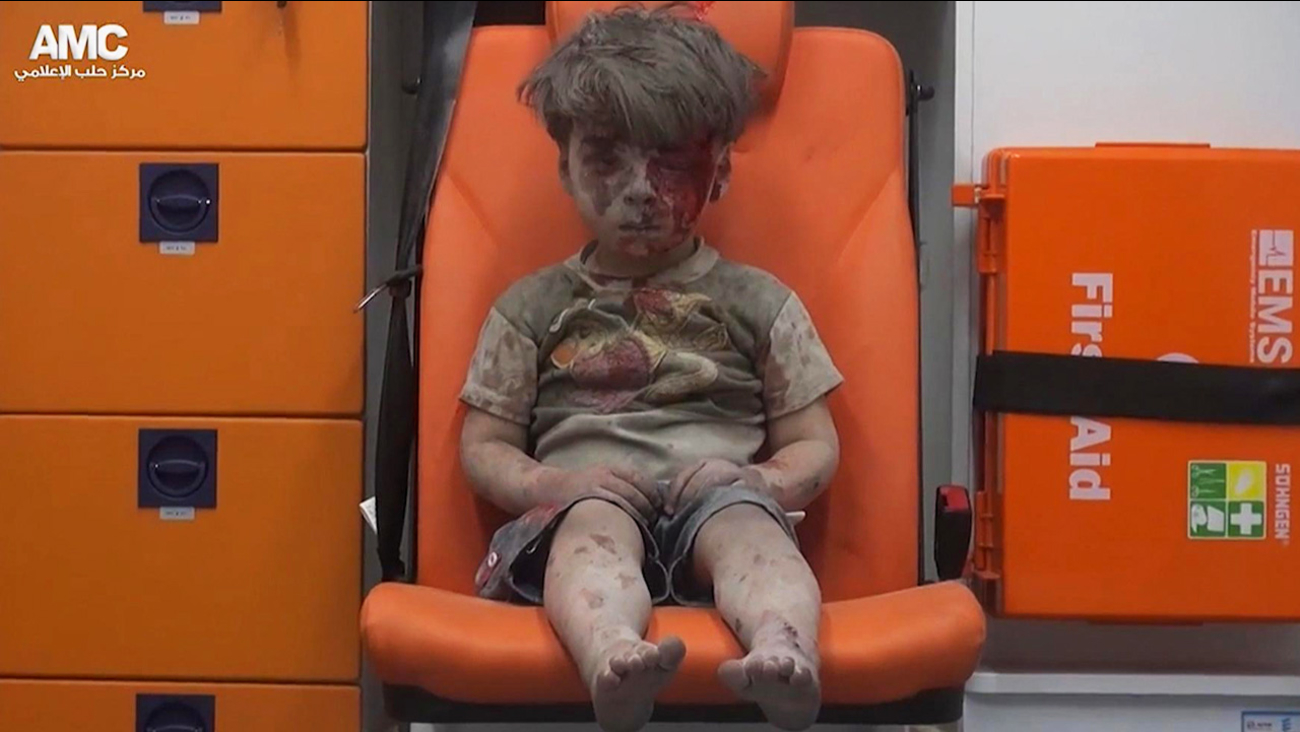 A child sits in an ambulance after being pulled out of a building hit by an airstrike in Aleppo. The frame is taken from video provided by Syrian anti-government activist group AMC (Aleppo Media Center via AP)

BEIRUT, Lebanon -- Syrian opposition activists have released haunting footage showing a young boy rescued from the rubble in the aftermath of a devastating airstrike in Aleppo.

The image of the stunned and weary looking boy, sitting in an orange chair inside an ambulance covered in dust and with blood on his face, encapsulates the horrors inflicted on the conflicted northern city and is being widely shared on social media.

Video shows the aftermath of airstrikes in Aleppo

Warning: Video may contain images not suitable for sensitive viewers

Doctor in Aleppo on Thursday identified the boy as 5-year-old Omran Daqneesh. Osama Abu al-Ezz confirmed he was brought to the hospital known as "M10" Wednesday night following an airstrike on the rebel-held district of Qaterji with head wounds, but no brain injury, and was later discharged.

Doctors in Aleppo use code names for hospitals, which they say have been systematically targeted by government airstrikes. Abu al-Ezz said they do that "because we are afraid security forces will infiltrate their medical network and target ambulances as they transfer patients from one hospital to another."

In the video posted late Wednesday by the Aleppo Media Center, a man is seen plucking the boy away from a chaotic nighttime scene and carrying him inside the ambulance, looking dazed and flat-eyed.

The boy then runs his hand over his blood-covered face, looks at his hands and wipes them on the ambulance chair.

Opposition activists said there were eight casualties overall from the air strike on Qaterji, among them five children.


The image of Omran in the orange chair is reminiscent of the image of Aylan Kurdi, the drowned Syrian boy whose body was found on a beach in Turkey and came to encapsulate the horrific toll of Syria's civil war.
Related topics:
bombingbuzzworthyu.s. & worldsyria
Copyright © 2020 by The Associated Press. All Rights Reserved.
U.S. & WORLD