6 officers post bond in case of man who died after being injured in police custody; 5 released 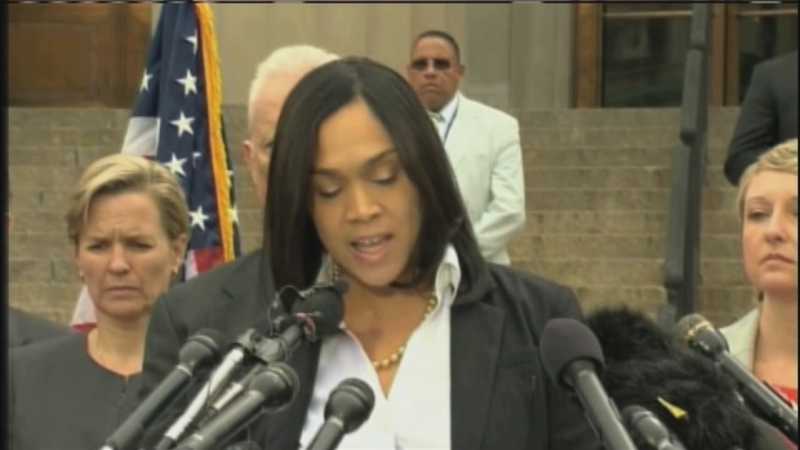 BALTIMORE, MD -- Rage turned to relief in Baltimore on Friday when the city's top prosecutor charged six police officers with felonies ranging from assault to murder in the death of Freddie Gray.

State's Attorney Marilyn Mosby said Gray's arrest was illegal and unjustified, and that his neck was broken because he was handcuffed, shackled and placed head-first into a police van, where his pleas for medical attention were repeatedly ignored as he bounced around inside the small metal box.

The swiftness of her announcement, less than a day after receiving the police department's criminal investigation and official autopsy results, took the city by surprise. So too did her detailed description, based in part on her office's independent investigation, of the evidence supporting probable cause to charge all six officers with felonies.

The police had no reason to stop or chase after Gray, Mosby said. They falsely accused him of having an illegal switchblade when in fact it was a legal pocketknife. The van driver and the other officers failed to strap him down with a seatbelt, a direct violation of department policy, and they ignored Gray's repeated pleas for medical attention, even rerouting the van to pick up another passenger.

Mosby did not say whether there was any indication the driver deliberately drove erratically, causing Gray's body to strike the van's interior. In 2005, a man died of a fractured spine after he was transported in a Baltimore police van in handcuffs and without a seat belt. At a civil trial, an attorney for his family successfully argued police had given him a "rough ride."

The officers missed five opportunities to help an injured and falsely imprisoned detainee before he arrived at the police station no longer breathing, she said. Along the way, "Mr. Gray suffered a severe and critical neck injury as a result of being handcuffed, shackled by his feet and unrestrained inside of the BPD wagon," she said.

Her announcement triggered celebrations across the same West Baltimore streets that were smoldering just four days earlier, when Gray's funeral led to riots and looting.

"We are satisfied with today's charges," Gray's stepfather, Richard Shipley, told a news conference. "These charges are an important step in getting justice for Freddie."

But a lawyer hired by the police union insisted the officers did nothing wrong. Attorney Michael Davey said Friday that Mosby has committed "an egregious rush to judgment."

"We have grave concerns about the fairness and integrity of the prosecution of our officers," Davey said.

Mosby rejected a police union request to step aside and appoint a special prosecutor to handle the case, and said honorable police officers should have no problem working with prosecutors in Baltimore.

The six officers turned themselves in at the city jail Friday afternoon after the charges were announced. All were later released on bonds of between $250,000 and $350,000.

Some law enforcement veterans worried that the charges could have a chilling effect. Robert Leight, a former detective in Pennsylvania who has worked for the FBI and as a federal prosecutor and defense attorney, said "the biggest danger is that the police officer will not properly perform his duties."

Gray was stopped by police in Sandtown, a poor, overwhelmingly African-American neighborhood in West Baltimore. He locked eyes with a police officer and then ran. Two blocks later, they pinned him to the sidewalk, handcuffed him and dragged him into a transport van, a scene captured on bystander's cellphone video and shown around the world.

Mosby said the police review, the autopsy and her own office's investigation all point to homicide. The officers were booked Friday on charges ranging from assault and manslaughter, carrying 10-year prison sentences, to second-degree "depraved heart" murder, which could put the van driver in prison for 30 years if convicted.

In a city that struggles daily with pervasive poverty and widespread joblessness, failing schools, drug addiction, a crumbling infrastructure and corruption, Gray's death has become emblematic of the broad social and economic problems holding Baltimore down.

But unlike other major cities grappling with police killings, Baltimore's mayor, state's attorney and police commissioner are black, like the majority of the city's population.

Three of the officers charged in the case, including the van driver, are also black, according to online court records. The other three are listed as belonging to the broad category of "White, Caucasian, Asiatic Indian, Arab," without further elaboration.

The city, which has been on edge since Gray's death on April 19, remains under a nighttime curfew, with 2,000 National Guard troops augmenting police reinforcements from around the state of Maryland. Malik Shabazz, the president of Black Lawyers for Justice, says Saturday's protest march will now be a "victory rally," and said Mosby is "setting a standard for prosecutors all over the nation."

At City Hall, Andrea Otom, 41, sobbed with something like joy.

"You have to be able to expect that at some time, the pendulum will swing in your favor, and in the black community we've seen it over and over and over where it doesn't," Otom said. "I'm so happy to see a day where the pendulum has finally begun to swing."

U.S. Rep. Elijah Cummings, a Democrat from West Baltimore, not far from where Gray was raised and arrested, said the neighborhood and others like it "have never seen a victory."

"So many felt like the system had worked against them," Cummings said Friday. "As we approach the evening of our lives, we want to make sure our children have a better morning."

In an impassioned statement delivered shortly after the charges were made public, Mayor Stephanie Rawlings-Blake warned that police misconduct will not be tolerated on her watch.

"To those of you who wish to engage in brutality, misconduct, racism and corruption, let me be clear," she said, "there is no place in the Baltimore City Police Department for you."

Rashawn Ray, a sociologist at the University of Maryland, said the murder and manslaughter charges in Gray's death shape a debate that goes much deeper than legal limits on use of force by police officers. It has triggered the frustration, anger and hopelessness of generations of disenfranchised people in Baltimore's most marginalized neighborhoods, he said.

"This definitely seems like the first time in recent history that the state has done what the community feels is the right thing," Ray said. "These charges become a representation of culpability, responsibility, that the state can't just treat citizens like they are not human beings."