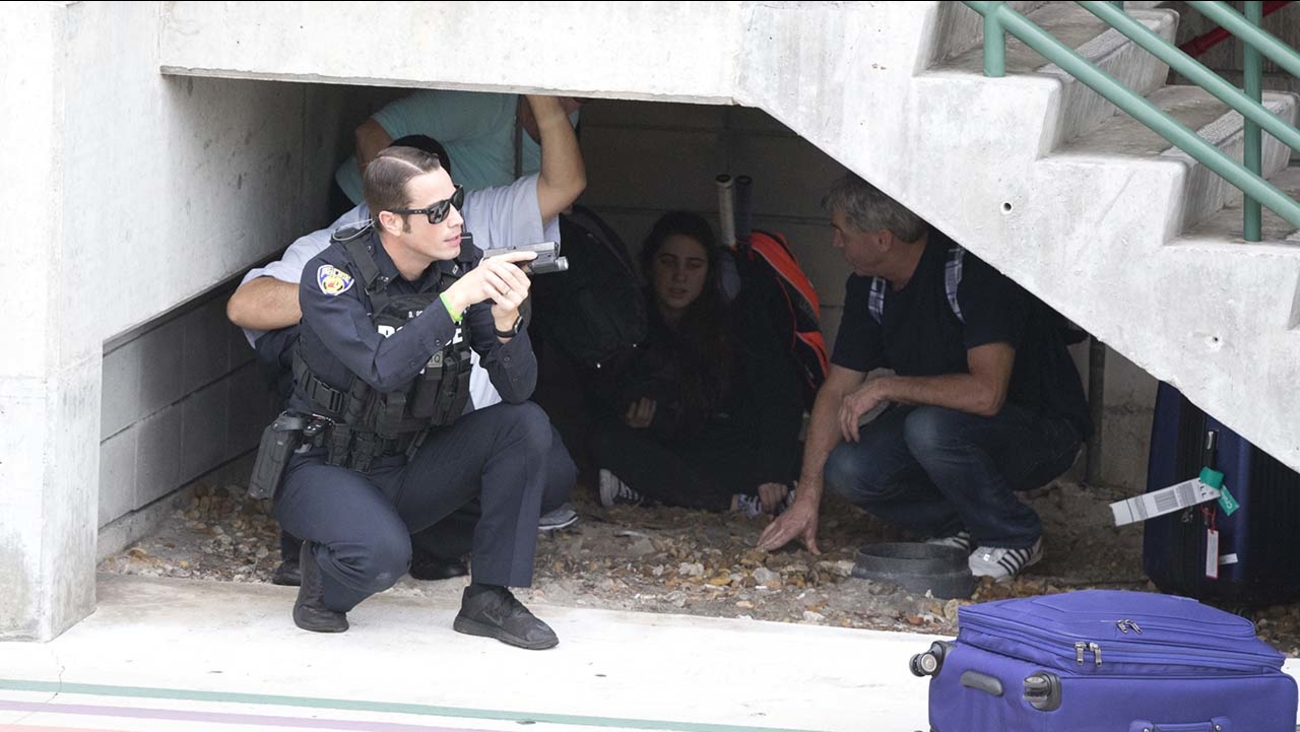 AP
FORT LAUDERDALE, FL -- The Iraq war veteran accused of killing five travelers and wounding six others at a busy international airport in Florida appears to have traveled there specifically to carry out the attack, authorities said Saturday, but they don't know yet why he chose his target and have not yet ruled out terrorism.

Authorities said during a news conference that they had interviewed roughly 175 people, including a lengthy interrogation with the cooperative suspect, 26-year-old Esteban Santiago, a former National Guard soldier from Alaska. Flights had resumed at the Fort Lauderdale airport after the bloodshed, though the terminal where the shooting happened remained closed.

FBI Agent George Piro said Santiago spoke to investigators for several hours after he opened fire with a 9mm semiautomatic handgun that he appears to have legally checked on a flight from Alaska.

Investigators are combing through social media and other information to determine Santiago's motive, and it's too early to say whether terrorism played a role, Piro said. In November, Santiago had walked into an FBI field office in Alaska saying the U.S. government was controlling his mind and forcing him to watch Islamic State group videos, a law enforcement official said.

RELATED: Florida airport reopens as suspect is booked into jail

Santiago had not been placed on the U.S. no-fly list and appears to have acted alone, Piro said.

The attack sent panicked witnesses running out of the terminal and spilling onto the tarmac, baggage in hand. Others hid in bathroom stalls or crouched behind cars or anything else they could find as police and paramedics rushed in Friday to help the wounded and establish whether there were any other gunmen.

Bruce Hugon, who had flown in from Indianapolis for a vacation, was at the baggage carousel when he heard four or five pops and saw everyone drop to the ground. He said a woman next to him tried to get up and was shot in the head.

"The guy must have been standing over me at one point. I could smell the gunpowder," he said. "I thought I was about to feel a piercing pain or nothing at all because I would have been dead."

Santiago had been discharged from the National Guard last year after being demoted for unsatisfactory performance. His brother, Bryan Santiago, said Saturday that his brother had requested psychological help but received little assistance. Esteban Santiago said in August that he was hearing voices, Bryan Santiago said in Spanish on Saturday as he stood outside his family's home. He said he told his brother then to seek help.

"How is it possible that the federal government knows, they hospitalize him for only four days, and then give him his weapon back?" Bryan Santiago said.

His mother declined to comment as she stood inside the screen door, wiping tears from her eyes. The only thing she said was that Esteban Santiago had been tremendously affected by seeing a bomb explode next to two of his friends when he was around 18 years old while serving in Iraq.

When Santiago spoke of mind control at the FBI office in November, agents questioned the agitated and disjointed man before calling police, a law enforcement official told The Associated Press. The official, who was not authorized to discuss the case and spoke on condition of anonymity, said Santiago was then taken for a mental health evaluation.

Piro, who is in charge of the Miami field office, said Santiago clearly indicated at the time that he was not intent on hurting anyone.

Santiago, who is in federal custody, will face federal charges and is expected to appear in court Monday, Piro said.

It is legal for airline passengers to travel with guns and ammunition as long as the firearms are put in a checked bag - not a carry-on - and are unloaded and locked in a hard-sided container. Guns must be declared to the airline at check-in.

Santiago arrived in Fort Lauderdale after taking off from Anchorage aboard a Delta flight Thursday night, checking only one piece of luggage - his gun, said Jesse Davis, police chief at the Anchorage airport.

At Fort Lauderdale, "after he claimed his bag, he went into the bathroom and loaded the gun and started shooting. We don't know why," said Chip LaMarca, a Broward County commissioner who was briefed by investigators.

The gunman was taken into custody after throwing his empty weapon down and lying spread-eagle on the ground, one witness said.

"People started kind of screaming and trying to get out of any door they could or hide under the chairs," the witness, Mark Lea, told MSNBC. "He just kind of continued coming in, just randomly shooting at people, no rhyme or reason to it."

The Fort Lauderdale gunman said nothing as he "went up and down the carousels of the baggage claim, shooting through luggage to get at people that were hiding," according to Lea. The killer went through about three magazines before running out of ammunition, Lea said.