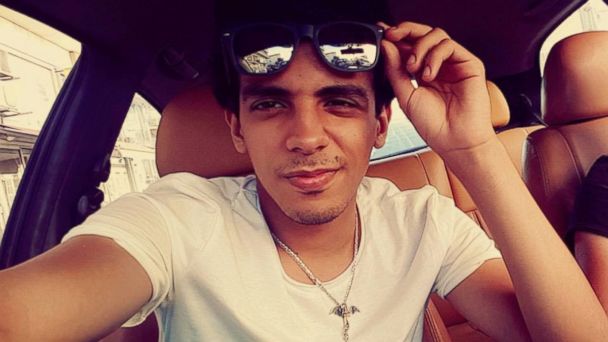 A Moroccan university student vacationing in Nice is grateful to be alive after the truck driven by a terrorist that plowed into a large crowd during Bastille Day celebrations Thursday night missed crushing the 20-year-old by less than eight inches.

Imad Dafaaoui's evening started on a festive note, but turned near-deadly: "I was at my friend's apartment, and we heard fireworks coming from the beach, so we decided to put on our clothes and go see the fireworks," Daffaoui told ABC News early Friday morning from Nice. "We went there, we took photos."

After the fireworks finished, Dafaaoui and his friend headed back to their car to grab a cell phone battery pack -- and that's when the pair's night out turned into a nightmare.

"We were next to the Hotel Negresco, and we were taking pictures, and then we heard people screaming from the back," he says. "We were like what's going on? There were people running towards me, and people were screaming."

Then, Dafaaoui spotted the truck on its deadly path. "I saw a huge truck, crushing over people," he says. "It was running over people. Some people were trying to get out the way. Some people were in shock. I started to run away. I was in shock. I couldn't even think. I was running. There was a bench in front of me, so I had to jump over it, so I jumped over it and fell over on a woman."

He continues to recall his near-death experience, "That's when the truck was coming toward me. I just closed my eyes. It was so close. I was just waiting to die. The truck was really close to me. The truck crashed the bench. It was 20 centimeters away from me. I was in shock."

Dafaaoui, who by this point was separated from his friend, says he didn't have time to take note of the driver's appearance. But, he says, the truck continued to plow through the crowd -- a sight he says, he couldn't stomach to watch.

"The truck kept going after it hit the bench," he says. "It was still crushing people on its way as it went a little farther. But I couldn't keep looking at it. I had to get away from it."

As he got up, both he and the woman he had fell on started to run away again. "Then I saw people running again," he said. "I thought it was another attack."

He says police officers then escorted those running away to the nearby Musee Massena, located across the street from the Hotel Negresco. "When we went in there were people who were injured," he said. "They were providing us with water. I asked the people to let us out but they said no. They kept us inside for two hours to keep us safe. I looked outside the window, and there were still people on the street. I was looking on my phone for information. I couldn't get information from the people around here. Most of the people were tourists. Most of them European."

Dafaaoui said he's still in shock that the the truck was intentionally driven into the crowd. "In the beginning I thought it was a drunk driver," he says. "I was trying to figure out why people were running and screaming. But after 5 or 10 seconds, I saw a lot of bodies on the street. We saw a lot of bodies. Most of them were dead. I've never seen dead bodies. I'm still in shock. I saw people with broken legs. I couldn't keep looking. They were covering people up with plastic bags."