Empty jails hope to cash in on illegal immigration crackdown 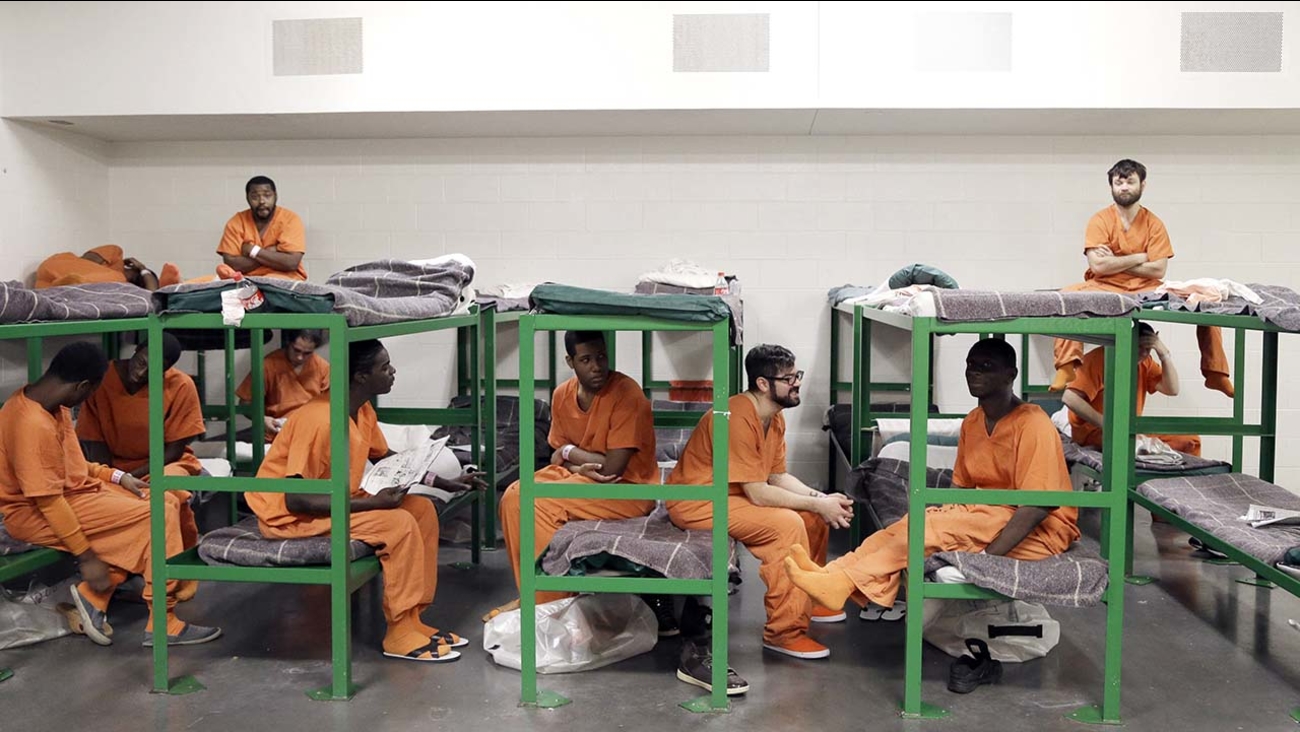 AP
DALLAS, Texas -- Several Texas counties that are struggling with debt because their jails have few or no prisoners hope to refill those cellblocks with a different kind of inmate: immigrants who have entered the country illegally.

The debt dates back to the 1990s and the first decade of the 2000s, when some rural counties were losing employment prospects and population. To bring jobs and money, they built correctional centers with hundreds and sometimes more than a thousand beds that could be used to house inmates from other counties as well as prisoners for the state and federal governments.

In some cases, the strategy worked, at least for a while. But a decline in crime and an increase in alternative sentencing reduced the Texas prisoner population and created a glut of jail space.

Now the debts, utility bills and maintenance are becoming so burdensome that counties are confronting a difficult choice. They can seek a federal contract to house some of the immigrants expected to be detained in President Donald Trump's immigration crackdown. Or they can sell the vacant detention centers to private prison companies that aim to do the same.

Jails and private prisons across the country are weighing their options after the Department of Homeland Security announced in January that it was shopping for more jail space as part of its efforts to secure the border.

In some places, the situation is the reverse of Texas, with public prisons full and states paying for extra beds. A private prison operator that had been housing 250 inmates for Vermont recently dropped the state as a client because the federal government will probably offer more for the same space.

"Anyone with vacant beds is hoping the federal government will lease them at a much higher rate," Lisa Menard, acting commissioner of the Vermont Department of Corrections told lawmakers in February. "Immigrations and customs enforcement are looking to lease beds everywhere."

Three vacant Texas detention centers have been sold to private prison companies in the last few weeks, according to county officials and records filed with the national Municipal Securities Rulemaking Board.

Some of the jails require updating to meet U.S. Immigration and Customs Enforcement standards, but the existing facilities could put Texas at an advantage compared with other states where the companies would have to spend months building detention space.

Meanwhile, the traditional inmate-holding business is still declining. A proposed budget from the Texas Senate would end state contracts with four facilities, including three that are privately run, making it more important for those companies to get immigrant contracts to stay profitable.

ICE would not discuss how many beds the agency might need or its timetable for obtaining them. Agency spokesman Carl Rusnok declined to discuss any negotiations, citing the confidentiality of the federal contracting process.

At least one advocacy group is wary of the secretive process and of putting more detainees in privately run facilities after complaints and violations of inmate-care standards.

"If this is the plan to expand to the bottom of the barrel in detention centers, that should raise huge red flags for people concerned about immigrants' well-being and rights," said Bob Libal, executive director of Austin-based Grassroots Leadership, which seeks immigration and detention reform.

Management and Training Corp. recently purchased a South Texas detention center that was shuttered after a 2015 inmate riot left it uninhabitable. The Willacy County Correctional Center, about 45 miles north of the Mexico border, fetched close to $68 million, allowing the county to pay off the construction bonds.

Until the riot over alleged deficiencies in medical care, the company ran the facility in a private-public partnership with the county.

Company spokesman Issa Arnita said MTC was "working closely with ICE and hoping to get a contract."

Officials in Maverick and Jones counties confirmed that their empty correctional centers were being purchased by the private prison company known as the GEO Group Inc., which runs the most immigrant detention facilities of any private company operating in Texas.

A spokesman for GEO said the company does not comment on specific transactions.

Like a handful of other counties across Texas, Maverick County formed a nonprofit corporation - the Maverick County Public Facility Corporation- to obtain financing through municipal bonds and insulate the county from direct financial responsibility. A private operator would then run the detention center and split the profits.

After a 2013 contract disagreement with GEO over the division of profits, the private company pulled out and the county tried to operate the facility and repay the bonds, said Maverick County Judge David Saucedo, the county's top administrative officer.

The county eventually reached an agreement with bondholders to foreclose on the facility.

Other counties have entered into agreements with private prison companies to renovate their empty facilities in expectation of reopening if immigrant detention opens opportunities.

However, some county officials say they have no plans to work with prison companies because of previous experiences.

After Emerald Correctional Management pulled out of its contract to run a 600-bed facility in 2014, La Salle County decided to operate the detention center itself.

With 350 to 450 prisoners on any given day, many picked up by the U.S. Marshals Service, the county about 40 miles (64 kilometers) north of Laredo is finally turning a profit. Judge Joel Rodriguez was cautious about the prospects of an increase in immigrant detentions.

"There are a lot of facilities in Texas sitting empty," he said. "And I don't know if they will be filled because of this."