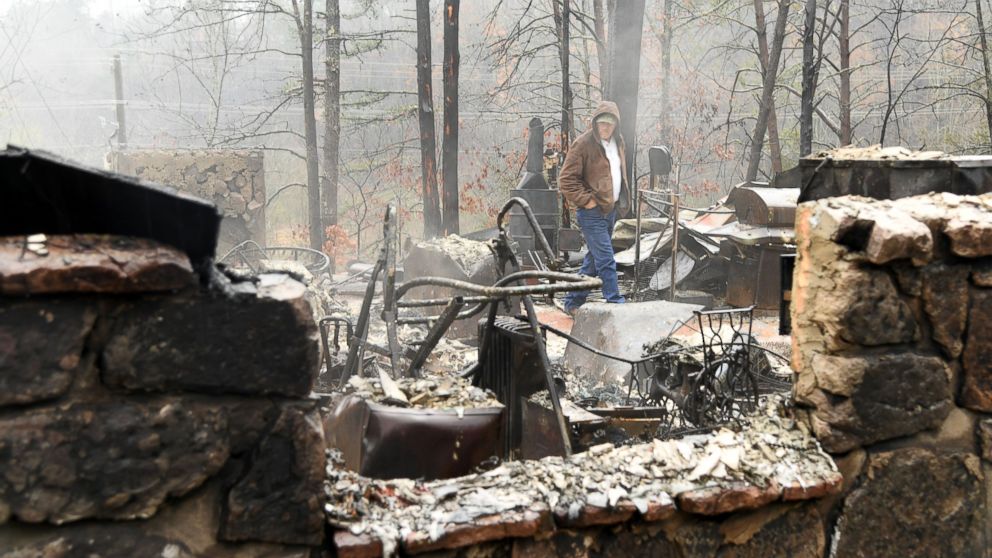 A total of 13 deaths have now been confirmed in the massive wildfires that have devastated eastern Tennessee's Sevier County, according to our ABC affiliate WATE.

The fires, described as the state's largest in 100 years, are believed to be human-caused, authorities said.

Twelve of the victims died as a direct result of the firestorm, and one victim died of a heart attack while trying to escape a blaze, officials said at a news conference this morning. The briefing was held in Gatlinburg -- one the worst-hit cities in Sevier County.

"It certainly is distressing and saddening to all of us, and we are extending our sympathy to all the families that are involved," Sevier County Mayor Larry Waters said. "I can't describe you the feeling that we have over this tragedy, and, especially, the loss of lives."

The identifies of six of the 13 deceased have been confirmed, Waters said. He emphasized that authorities want to make sure they are "absolutely certain" that they are accurate on the names of the deceased and that their immediate families have been informed before releasing such information to the public.

At least 85 other people have been injured as a direct result of the fires, and more than 1,000 structures have been severely damaged or destroyed, according to Waters.

Officials believe that 90 percent of the affected areas in the county will have undergone a preliminary search by this evening, Waters said. He added that "we hope and pray" the death toll does not climb.

Meanwhile, the Tennessee Bureau of Investigation is continuing to follow up on leads to locate reported missing persons, Waters said. Anyone who wants to report a missing person, or knows of a missing person who has been found, is urged to call the TBI at 1-800-TBI-FIND.

Homeowners and renters in Gatlinburg have also finally been allowed to go into the city to check on their properties as of this morning, Waters said. He added that officials hope to have Gatlinburg open to the public by Wednesday, Dec. 7.

Property owners can also check on the condition of their properties via an interactive map at www.seviercountytn.org, Waters said. He added that it was important to note that the map will be gradually updated, so owners should check back frequently throughout the weekend.

Haslam said he has received calls of support "from almost every governor in the country," as well as from President Obama, President-elect Donald Trump and Vice President-elect Mike Pence.

"We all love these mountains," Haslam said. "It's a special place."

Alexander said though the fire was "terrifying and impressive," the community's and nation's response to it "is even more impressive."

"My heart breaks for the families who've lost loved ones and homes, but I know you'll be back because east Tennesseans are strong, tough and resilient," he said.

Corker acknowledged that having 13 lives lost was "an incredible tragedy," but he said he also wanted to give his "hats off" to the first responders and volunteers.

Towards the end of the news conference, a few reporters got into a heated exchange with officials. The reporters questioned if people in the area were given early enough notice to evacuate.

Officials noted that an evacuation alert was sent out to mobile phones in the area around 9:04 p.m. Monday, though power outages made some notifications difficult to send.

One official noted that if some people did not receive the alert sent out then, "of course we're unsatisfied."

Waters said at another news conference this afternoon that the storm was a tragedy and that authorities did the best they could.

"We're going to evaluate the responses and what went on at the appropriate time," he said. "That time is not now."