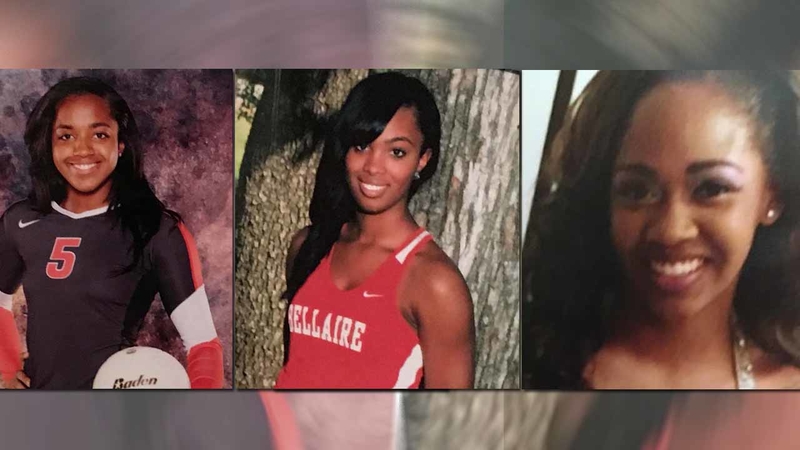 HOUSTON (KTRK) -- A community is coming together after three teenagers were tragically killed Sunday in a car accident caused by distracted driving.

During a vigil Monday night, family and friends remembered one of the three girls whose life was lost in an instant after the car she was in veered into the path of a tractor-trailer rig. About 30 to 40 people attended the vigil for 18-year-old Brittanie Johnson. In remembrance, the group lit candles and released balloons into the night sky.

"We love you Brittanie," the crowd said.

Grief counselors were at Bellaire High School Monday morning as students return to class knowing that one of their classmates had been killed.

Jade Robinson, 17, the captain of the girls volleyball team at the school, was one of the three friends killed.

The friends were returning from a Spring Break trip to Padre Island.

Those who died were Jade, her sister Brianna, 19, and Johnson. The 18-year-old driver, Shelby Coleman, was the sole survivor. She is said to be in improving condition in a Corpus Christi hospital.

In tears, the sisters' mother recalled her daughters, both student athletes.

"Jade was courageous with the heart of a lion and Brianna was sweet with a heart of gold," she said.

State troopers say the accident was caused by distracted driving. A cell phone GPS was being used to lead the friends home to Houston. The crash occurred near Corpus Christi.

Jade was going to attend Tennessee Weslyan college in the fall. She had received a full scholarship because of her volleyball and academic ability. Her sister had been on the track team at Bellaire High School, and was attending Houston community college.

Jade also played with the Houston Juniors, a volleyball club. Director Stephanie Rouse called her the glue that held the team together.

Rouse also counsels her players not to drive with any distractions. "Social media is everywhere, but I tell them you don't need to have a phone in your hand text or GPS while you're driving."

"At the end of the day," she said wistfully,"God got a great volleyball player."

Jade Robinson, you are loved by many and will be missed by even more. https://t.co/nAS0cRJHbW pic.twitter.com/MQJ7sHgWhN

Brittanie Johnson had a bright future. Her aunts tell Eyewitness News she left high school early last year to get her GED and begin working full-time.

She was about to start taking classes at HCC to study fashion and design. Brittanie was the fourth of five children and would have turned 18 years old next month.

Her family says they were initially told that Johnson was alive at the hospital, but would not survive. The family rushed to Corpus Christie to say their goodbyes, but when they went into the room, they found Jade, not Brittanie, in the hospital bed. That, of course, added to their grief in the moment.

The family tells abc13 they appreciate all of the love and well wishes from friends and strangers alike on social media.

HISD officials released a statement: "This is an incredibly sad day for Bellaire and Lamar high schools. We extend our support and sympathy to the families and friends of these students, as well as to both school communities and the district, as a whole. Counselors are at Bellaire and Lamar today to provide support to students and staff. Please keep them in your thoughts."