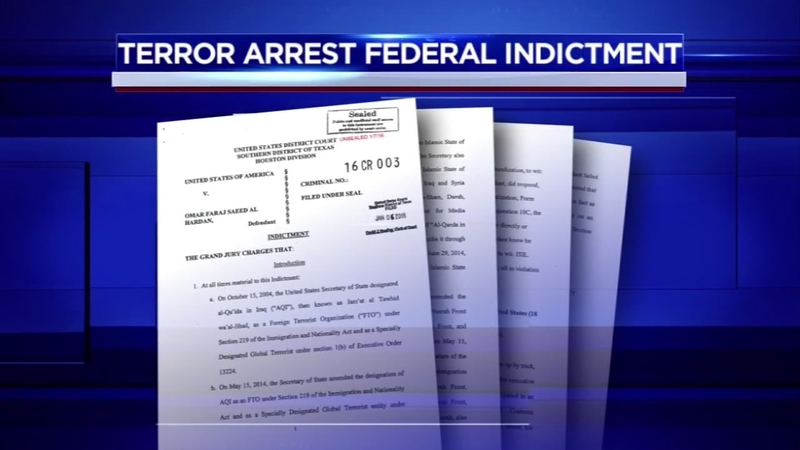 Authorities ID man at center of terror-related arrest in Houston

HOUSTON -- A Houston-area man has been arrested on federal charges he provided support to the Islamic State of Iraq and the Levant (ISIL), a foreign terrorist organization.

Omar Faraj Saeed Al Hardan, 24, was arrested today by FBI and Homeland Investigations agents. According to the Department of Justice, he is a Palestinian born in Iraq who came to the United States as a refugee in November of 2009 and was given legal permanent residence status in 2011.

The three-count federal indictment against him was unsealed Thursday night, revealing Al Hardan provided material support and resources to ISIL starting in May 2014. When he applied to become an American citizen in August 2014, he said he wasn't associated with a terrorist organization, when, according to the indictment, he was throughout that year and the year before. Finally, during the citizenship process, he denied having weapons training when, the government says, he had been trained on an automatic machine gun.

Al Hardan is scheduled for an initial court appearance Friday morning. Angela Dodge, a spokeswoman with the U.S. justice department, said more information could be released then. She also tried to reassure anyone who may be concerned about Thursday's arrest.

"There is no current threat to public safety associated with this arrest," Dodge said in a prepared statement.

"I applaud the thorough law enforcement investigation that resulted in this arrest," Patrick said. "Based on the facts, as we know them, today's action may have prevented a catastrophic terror related event in the making and saved countless lives.

"This is exactly what we have repeatedly told the Obama administration could happen and why we do not want refugees coming to Texas. There are serious questions about who these people really are, as evidenced by today's events."

"I applaud the FBI for today's arrest of this dangerous subject," Abbott said in a prepared statement. "However, this is precisely why I called for a halt to refugees entering the U.S. from countries substantially controlled by terrorists. I once again urge the President to halt the resettlement of these refugees in the United States until there is an effective vetting process that will ensure refugees do not compromise the safety of Americans and Texans."

Another terrorism-related arrest was made in Sacramento, California Thursday. It's unclear whether the two are related.