State of emergency declared for Ferguson amid tense protests 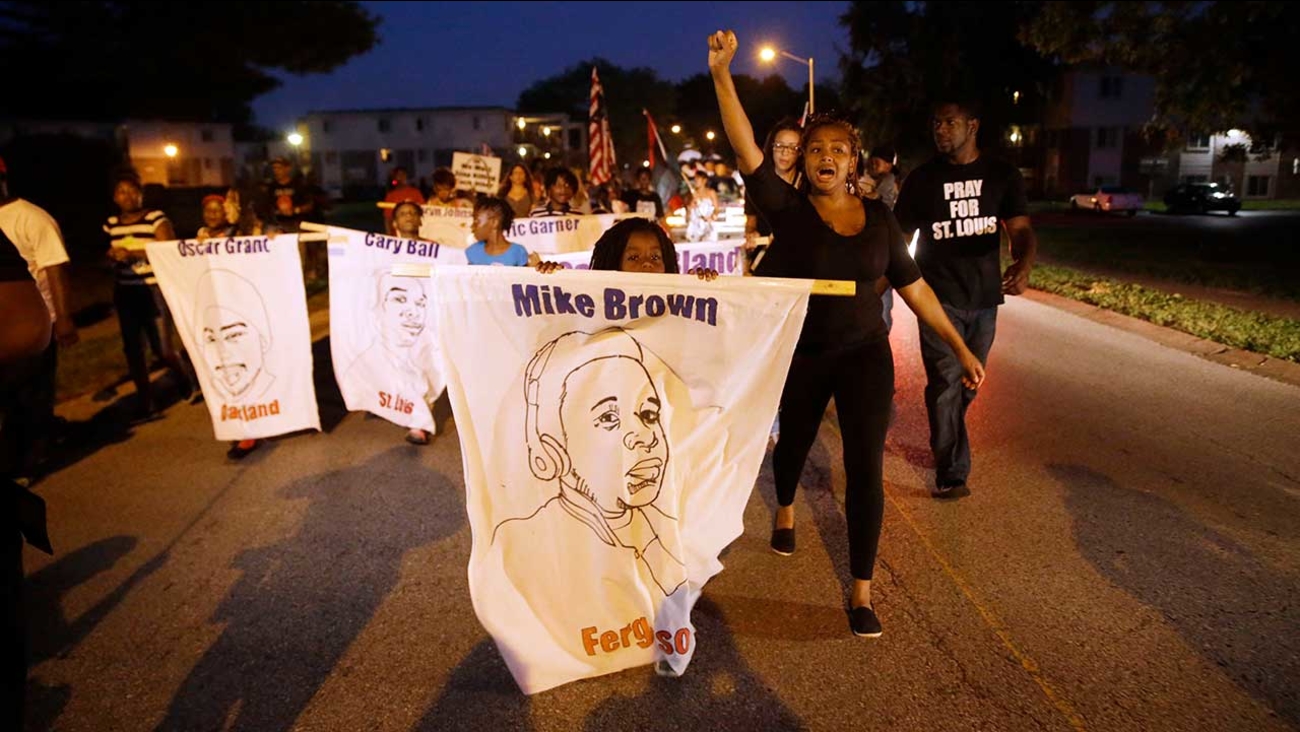 Protesters march down Canfield Drive near where Michael Brown was killed on Aug. 7, 2015, in Ferguson, Mo. (AP Photo/Jeff Roberson)

FERGUSON, MO -- A suspect who authorities say opened fire on officers in Ferguson, Missouri, on the anniversary of Michael Brown's death was critically wounded when the officers shot back, St. Louis County's police chief said Monday.

But the father of the suspect, 18-year-old Tyrone Harris Jr., called the police version of events "a bunch of lies." He said two girls who were with his son told him he was unarmed and had been drawn into a dispute involving two groups of young people.

St. Louis County prosecutors on Monday announced 10 charges against Harris - five counts of armed criminal action, four counts of first-degree assault on a law enforcement officer and a firearms charge. All 10 are felonies.

It was not immediately clear if the latest police shooting of a black suspect would spur renewed unrest in Ferguson, the site of many protests - some violent - in the aftermath of Brown's death on Aug. 9, 2014. St. Louis County Executive Steve Stenger issued a state of emergency, a move that authorizes county Police Chief Jon Belmar to take control of police emergency management in and around Ferguson.

Elsewhere, about 50 protesters were in custody after being arrested while blocking the entrance to a federal courthouse in downtown St. Louis, where they demanded federal action to stop what they consider racially abusive policing. Those in custody included scholar and civil rights activist Cornel West.

Belmar said at a news conference that officers had been tracking the suspect, who they believed was armed, during a protest marking the death of Brown, the black, unarmed 18-year-old whose killing by a white Ferguson police officer touched off the national "Black Lives Matter" movement.

At the height of what was already a rowdy protest in which rocks and bottles were thrown at officers, gunshots rang out from the area near a strip of stores, including some that had been looted. Belmar believes the shots came from about six different shooters. It was not clear what prompted the exchange, but Belmar said the groups had been feuding.

At one point, the suspect crossed the street and apparently spotted the plainclothes officers arriving in an unmarked van with distinctive red and blue police lights, Belmar said. He said the suspect shot into the hood and windshield.

The officers fired back at him from inside the vehicle and then pursued him on foot when he ran.

The suspect fired on officers again after he became trapped in a fenced-in area, the chief said, and all four officers fired back. He was struck and fell and was taken to a hospital, where Belmar said he was in "critical, unstable" condition.

Tyrone Harris Sr. told The Associated Press his son was a close friend of Michael Brown and was in Ferguson Sunday night to pay respects.

Harris said his son got caught up in a dispute among two groups of young people and was "running for his life" after gunfire broke out. He said the girls who were with his son said he had no weapons.

"My son was running to the police to ask for help, and he was shot," he said. "It's all a bunch of lies ... They're making my son look like a criminal."

The younger Harris does not have a listed attorney.

The suspect had a semi-automatic 9 mm gun that was stolen last year from Cape Girardeau, Missouri, Belmar said.

None of the officers was seriously injured. All four have been put on administrative leave, which is standard procedure. They were not wearing body cameras, Belmar said.

The shooting happened around 11:15 p.m. Sunday, sending protesters and reporters running for cover.

For the first time in three consecutive nights of demonstrations, some officers were dressed in riot gear, including bulletproof vests and helmets with shields. Police used smoke to disperse a crowd that lingered on West Florissant, Belmar said.

One officer was treated for cuts after a rock was thrown at his face, and two officers were pepper-sprayed by protesters, county police said. Five people were arrested.

St. Louis Post-Dispatch reporter Paul Hampel was beaten and robbed by attackers while covering the unrest. Hampel said he was taking photos and videos of break-ins along West Florissant Avenue when he was rushed from behind. He was bloodied and spent the night in a hospital with a concussion.