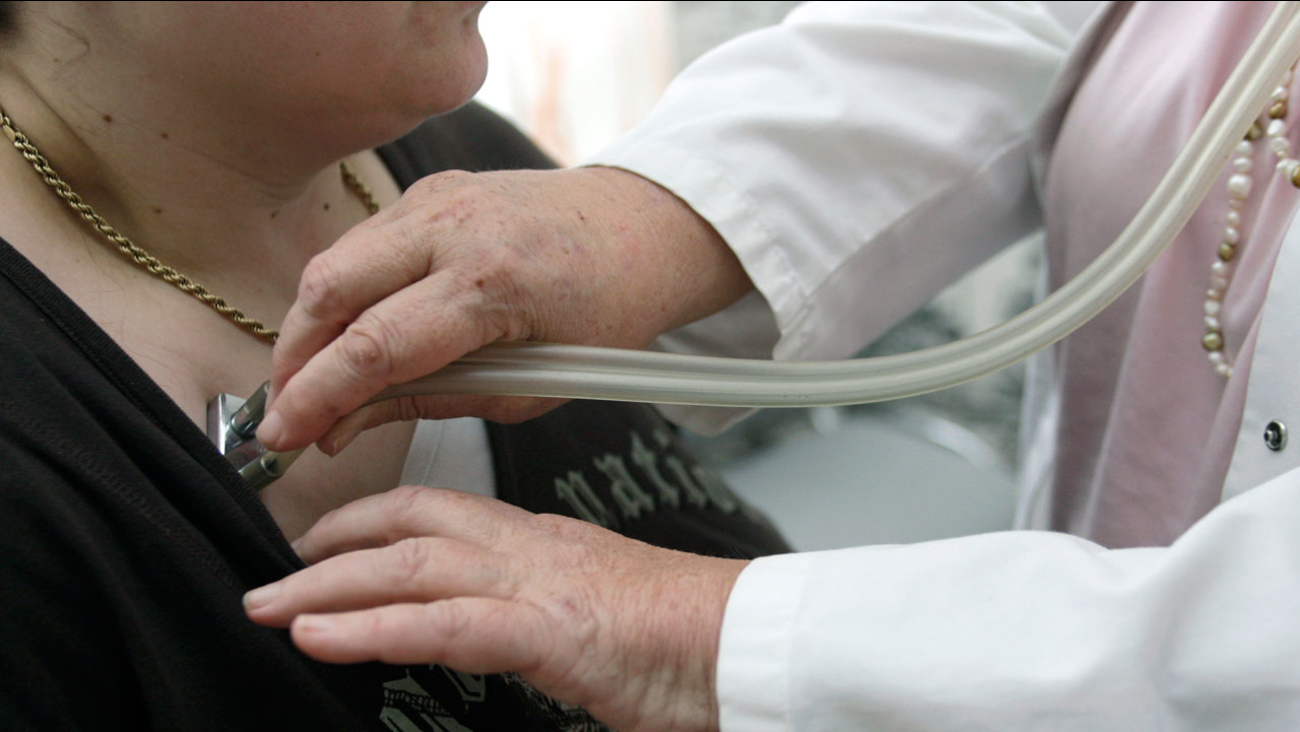 A doctor checks the health of a patient. (AP Photo/Thomas Kienzle)

WASHINGTON -- Legislation permanently overhauling how Medicare pays physicians won approval Tuesday from an atypically united Congress as lawmakers banded together to erase an irritant that has dogged them for years.

Adding urgency to legislators' work, the measure headed off a 21 percent cut in doctors' Medicare fees that would have hit home Wednesday, when the government planned to begin processing physicians' claims reflecting that reduction. The bill also provides billions of extra dollars for health care programs for children and low-income families, including additional money for community health centers.

Working into the evening, the Senate approved the measure 92-8 less than three weeks after the House passed it by a lopsided 392-37. With Republicans controlling the Senate since January, Majority Leader Mitch McConnell, R-Ky., has been eager to demonstrate his party's ability to conduct Congress' business efficiently.

Conservatives were unhappy that two-thirds of the bill's $214 billion, 10-year costs were financed by simply making federal deficits even bigger, while liberals wanted added money for children and women's programs. But McConnell defended the measure.

"It's another reminder of a new Republican Congress that's back to work," he said after the vote. "And while no bill will ever be perfect, this legislation is a sensible compromise with wide bipartisan support."

"Tonight is a milestone for the Medicare program, a lifeline for millions of people," said Sen. Ron Wyden, D-Ore.

President Barack Obama has promised to sign the bill, which marks a tandem effort by Democrats and Republicans at a time when the two parties are far likelier to block each other's initiatives.

The bill's chief feature was its annulling of a 1997 law aimed at slowing the growth of Medicare that has repeatedly threatened deep cuts in reimbursements to physicians and led to threats by doctors to stop treating the program's beneficiaries. Congress has blocked 17 reductions since 2003, an exercise that invites intense lobbying and difficult choices about finding budget savings that both parties detested.

Instead, the measure would create a new payment system with financial incentives for physicians to bill Medicare patients for their overall care, not individual office visits.

While Democrats touted the legislation's added funds for children and the poor, Republicans were claiming victory in changes the bill makes in Medicare that would have a long-term though modest impact on the huge program's finances.

While $141 billion of the measure's costs over the decade would come from added federal red ink, about $35 billion would come from Medicare beneficiaries, mostly by raising the medical and prescription drug premiums paid by some upper-income recipients starting in 2018. Though the affected beneficiaries already pay higher premiums than lower-earning people, Congress seldom increases costs on seniors, fearing retribution come the next Election Day from older voters.

The bill would raise another $37 billion by cutting Medicare reimbursements to hospitals and other providers.

Before passage, senators rejected six amendments, three from each party, that were all but sure to lose but let lawmakers demonstrate their disapproval of provisions they opposed.

A Democratic proposal to extend the two years of extra money the measure provided for the popular Children's Health Insurance Program to four years lost on a 50-50 vote - short of the 60 votes needed to prevail. By 58-42, the chamber rejected an effort by conservatives to force Congress to find enough savings to pay for the entire measure without increasing federal red ink.

"Honestly it's my hope that the amendments are not approved, because we need to get this bill down to the president for signature before midnight," McConnell told reporters.

The American Medical Association and other providers' organizations were urging lawmakers to pass the bill. AARP, the senior citizens' lobby, wanted legislators to back an amendment ending Medicare's annual coverage limits for therapy but stopped short of urging the bill's defeat without that change.

Conservative groups including the Club for Growth and Heritage Action for America pressed lawmakers to support the GOP amendment - which lost - to require Congress to pay for the entire bill.

House Speaker John Boehner, R-Ohio, who crafted the compromise with House Minority Leader Nancy Pelosi, D-Calif., warned senators of the impending doctors' cuts and underscored the futility of trying to amend the bill.

"The House legislation passed with overwhelming bipartisan support, and we do not plan to act again, so we urge the Senate to approve the House-passed bill without delay," Boehner said in a written statement.