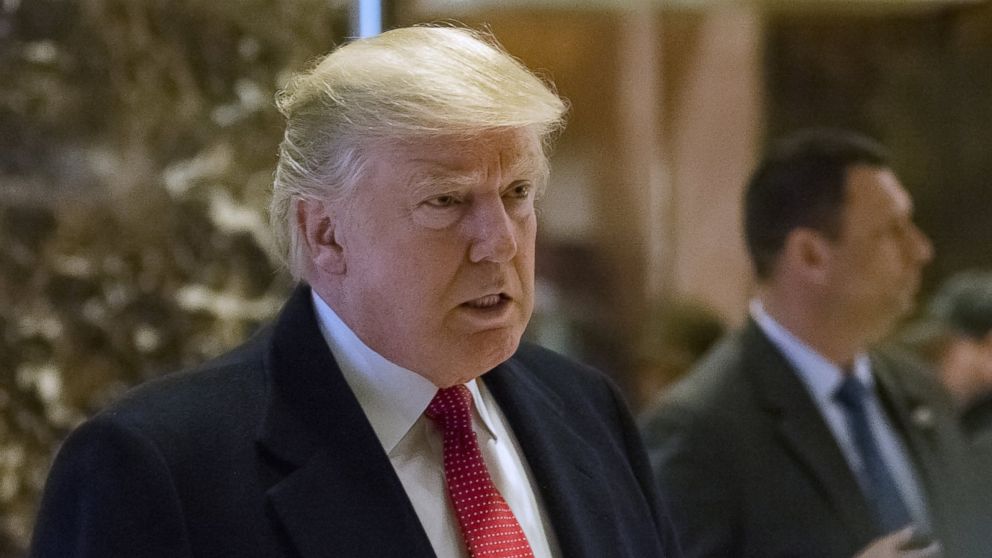 After the son of Donald Trump's pick for national security adviser, retired Lt. Gen. Michael Flynn, was forced out of the transition team's efforts over a fake news story that the younger Flynn pushed on Twitter, two Trump transition officials told ABC News earlier this week the decision to dismiss Michael G. Flynn came from Trump himself.

The son is accused of pushing the hoax conspiracy theory "Pizzagate" in a flood of tweets Sunday and Monday, prompted by an incident involving gunfire at a Washington, D.C., pizzeria. The younger Flynn is "no longer involved with the transition efforts," Trump team spokesman Jason Miller said earlier this week.

But Trump has himself promoted untruths or unsubstantiated claims via social media and on the campaign trail.

Here are some examples:

Trump perpetuated the myth that President Obama was not born in the United States for years, often using tweets to push the claim, starting in 2011.

He finally conceded at a September 2016 news conference used to promote his new D.C. hotel that Obama was born in the United States.

"President Barack Obama was born in the United States, period," Trump said. "Now we all want to get back to making America strong and great again."

But that didn't stop Trump from continuing his comments that Obama was ineligible to be president, based on U.S. law that only a "natural born Citizen, or a Citizen of the United States, at the time of the Adoption of this Constitution, shall be eligible to the Office of President."

Even after he won the election, Trump continued to insist that voter fraud occurred -- that he would have won the popular vote if not for "millions of people who voted illegally," providing no evidence to support the claim.

Vice President-elect Mike Pence Sunday cited on ABC News' "This Week" a Pew study as the source for the "millions" who allegedly voted illegally.

But the Pew study's primary author, David Becker, tweeted in response to references to his research: "As primary author of the report the Trump camp cited today, I can confirm the report made no findings re: voter fraud. We found millions of out of date registration records due to people moving or dying, but found no evidence that voter fraud resulted. Voter lists are much more accurate now than when we issued that study in 2012, thanks to the 20 states sharing data through @ericstates_info."

In another tweet, Trump named Virginia, New Hampshire and California as three states with "serious voter fraud." There is no evidence to back up the claim, and it's unclear as to why those states were selected.

ABC News reached out to election officials in all 50 states shortly before Election Day and not one had any evidence or reason to believe that widespread voter fraud has or would occur in their states.

At an August rally in Florida, Trump told supporters that the commander in chief is the "founder of ISIS."

"ISIS is honoring President Obama," he said. "He is the founder of ISIS. He founded ISIS. And I would say the co-founder would be crooked Hillary Clinton."

He pulled back on those comments two days later, saying it was "sarcasm."

The terrorist group can trace its history back to 2000 in Iraq. The group become known as ISIL in June 2014 with its founder Abu Bakr al-Baghdadi declaring it had established an Islamic "caliphate" in Iraq and Syria.

Just over a year ago, then-Republican contender Trump claimed residents of Jersey City, N.J., celebrated the World Trade Center attacks, telling ABC News' George Stephanopoulos that "there were people that were cheering on the other side of New Jersey where you have large Arab population."

"They were cheering as the World Trade Center came down," he added. "I know it might be not politically correct for you to talk about it, but there were people cheering as that building came down -- as those buildings came down, and that tells you something. It was well covered at the time."

At a campaign event the next day, he doubled down on that assertion.

"Lo and behold I start getting phone calls in my office by the hundreds, that they were there and they saw this take place on the internet," Trump said in Ohio.

At the time, several of Trump's fellow GOP candidates, including Jeb Bush and Marco Rubio, condemned Trump's remarks. Trump continued to stand by the assertion for weeks, even though no media outlet uncovered any reports from the time, nor did Trump's campaign provide any evidence to confirm that "thousands and thousands" of Muslims in New Jersey celebrated the Sept. 11 attacks.

ABC News checked all footage from the time of the attacks and the weeks after, finding no such claims or basis for the claims.

In May, Trump latched on to an unsubstantiated claim in a National Inquirer report that Sen. Ted Cruz's father, Rafael Cruz, was caught on camera with Lee Harvey Oswald, President Kennedy's killer, just three months before the assassin.

On "Fox and Friends," Trump seized on the claim, saying, "I mean, what was he doing with Lee Harvey Oswald shortly before the death, before the shooting? ... It's horrible."

In an interview with ABC News' Tom Llamas, Rafael Cruz lashed out at his son's then-GOP rival.

"That's typical of Donald Trump -- just attack and make all kinds of innuendo and attacks with no substance," the elder Cruz said.

But trump stood by his unsubstantiated claim, citing only the National Enquirer article as his evidence.