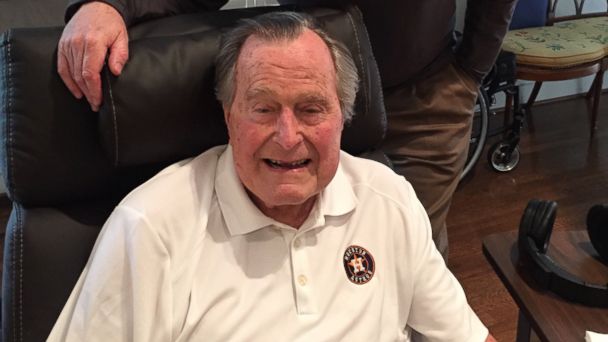 HOUSTON -- The first photo of former president George H.W. Bush since being discharged from a Houston hospital on January 30 after being treated for pneumonia hit the Internet Friday.

Greg Aiello, the senior vice president of communication at the NFL, tweeted a photo of the 41st president with his nephew, Denver Broncos president Joe Ellis.

"Broncos President Joe Ellis with his Uncle George from Houston who will toss the coin Sunday prior to #SuperBowl," Aiello tweeted.

Bush, along with his wife Barbara, will partake in the coin toss Sunday at Super Bowl 51 at NRG Stadium in Houston, where the New England Patriots will take on the Atlanta Falcons.

He teased his involvement with the coin toss earlier this week, tweeting, "Getting fired up for Sunday and #Superbowl," along with GIF of a spinning Super Bowl coin on a desk with a photo of himself and the former first lady.