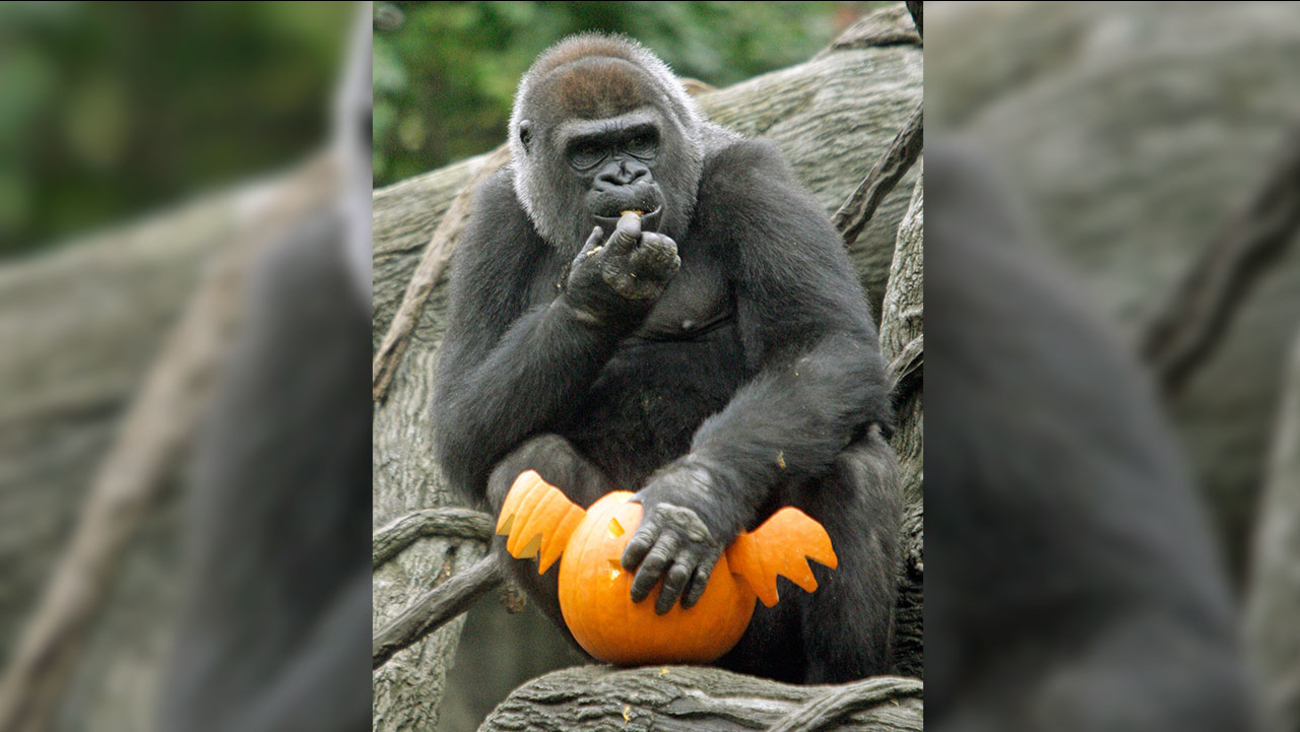 A gorilla eats treats from a pumpkin carved to resemble a bat, Thursday, Oct. 8, 2009, at the Cincinnati Zoo in Cincinnati. (AP Photo/Al Behrman)

CINCINNATI, OH -- A special zoo response team shot and killed a 17-year-old gorilla Saturday that grabbed and dragged a 3-year-old boy who fell into the gorilla exhibit moat, the Cincinnati Zoo's director said.

Authorities said the 3-year-old boy, who fell 10 to 12 feet, is expected to recover after being picked up out of the moat and dragged by the gorilla for about 10 minutes. He was taken to Cincinnati Children's Hospital Medical Center.

Director Thane Maynard said the zoo's dangerous animal response team that practices for such incidents decided the boy was in "a life-threatening situation" and that they needed to put down the 400-pound-plus male gorilla named Harambe.

"They made a tough choice and they made the right choice because they saved that little boy's life," Maynard said. "It could have been very bad."

Maynard said he hadn't talked with the boy's parents yet.

He said the gorilla didn't appear to be attacking the child, but he said it was "an extremely strong" animal in an agitated situation. He said tranquilizing the gorilla wouldn't have knocked it out immediately, leaving the boy in danger.

Maynard said it was the first time that the team had killed a zoo animal in such an emergency situation, and he called it "a very sad day" at the zoo. The lowland gorilla is an endangered species.

The incident was reported at around 4 p.m. The area around the gorilla exhibit was closed off Saturday afternoon as zoo visitors reported hearing screaming.

Harambe came to Cincinnati in 2015 from the Gladys Porter Zoo in Brownsville, Texas.

Maynard said the zoo's Gorilla World area would be open as usual on Sunday. He said the zoo believed the exhibit remains safe. They are still investigating, but zoo officials believe the boy crawled through a railing barrier, then fell into the moat.

The zoo prides itself for its work in protecting endangered species, and has been part of successful captive breeding efforts in recent years in the effort to save the endangered Sumatran rhino.
Related topics:
ohioanimal newsgorillas
Copyright © 2021 by The Associated Press. All Rights Reserved.
More Videos
From CNN Newsource affiliates
TOP STORIES