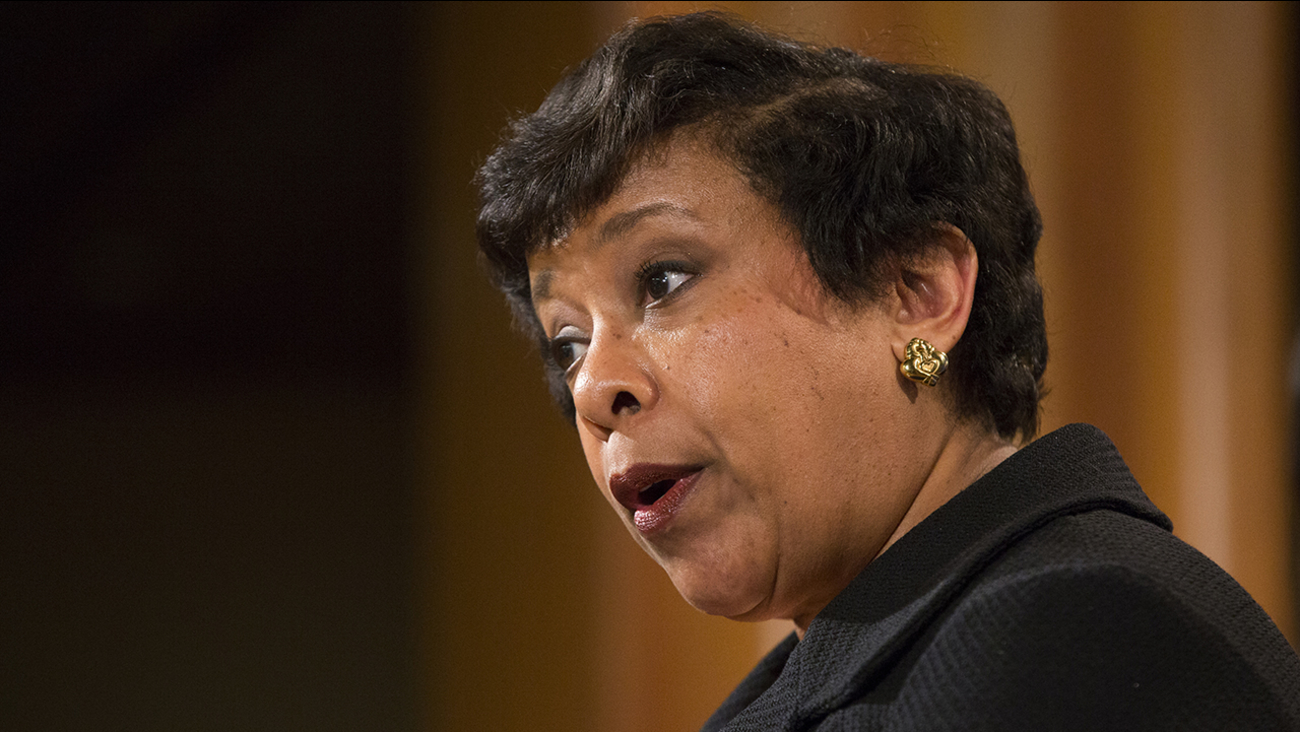 Attorney General Loretta Lynch speaks during a news conference at the Justice Department in Washington, Monday, May 9, 2016. (AP Photo/Evan Vucci)

RALEIGH, NC -- In suing the state where she was born and raised for discriminating against transgender people, Attorney General Loretta Lynch invoked the defining civil rights struggles of the last century and made clear that the federal government sees its dispute with North Carolina as about far more than bathrooms and showers.

Lynch, the first black woman to hold the job, elevated the profile of the Justice Department's potentially epic clash with North Carolina over its new bathroom law by placing it in the context of America's Jim Crow era - when signs above water fountains and restaurants fostered race discrimination - as well as more recent efforts to deny gay couples the right to marry.

"Instead of turning away from our neighbors, friends and colleagues, let us instead learn from our history and avoid repeating the mistakes of our past," Lynch said at a news conference Monday announcing the lawsuit, directly addressing North Carolina residents. "Let us reflect on the obvious but neglected lesson that state-sanctioned discrimination never looks good and never works in hindsight."

Her remarks, in unusually forceful and personal language, came as North Carolina Gov. Pat McCrory refused to back down over a law that requires transgender people to use the public restroom corresponding to the gender on their birth certificate. The Justice Department says the measure violates civil rights laws and is seeking a court order to block it.

Lynch's announcement of a lawsuit - and her reassurance to the transgender community that "We see you" - brought tears to Stephen Wiseman, a 37-year-old social worker and transgender man in Asheville, who praised Lynch for giving "historical examples that people can relate to."

White House responds to North Carolina's lawsuit, says bill is "inconsistent" with the interests of the economyhttps://t.co/cL7MGP16zC

He said it was a historic moment to have the attorney general stand behind a podium and offer transgender people such affirmation.

"That sort of acknowledgment and validation is huge when the other side is saying: 'you're nobody. You're making all this up,'" he said.

The rhetoric was perhaps fitting given what's at stake - billions of dollars in aid for North Carolina are up in the air, and there's the potential for a landmark decision regarding the reach of the nation's civil rights laws.

A judge could begin hearing arguments in the competing cases within weeks as North Carolina seeks to stop the government from temporarily blocking the law or stripping away funding, said Rina Lindevaldsen, a Liberty University law professor specializing in family and constitutional law.

"This seems like the kind of thing that's on track for the Supreme Court," she said.

The measure took effect in March, passed in reaction to a Charlotte ordinance allowing transgender people to use the bathroom that corresponds to their gender identity.

Since then, the state's been riven by business cancellations and boycotts from stars such as Bruce Springsteen and Pearl Jam. Contentious debate about the law has divided not only state residents but also public officials; state attorney general Roy Cooper, a Democrat running against McCrory for governor, has refused to defend it.

The Justice Department last week gave McCrory until Monday to say he would refuse to enforce the law. Instead, he doubled down by suing the federal government for a "baseless and blatant overreach" and later criticized Lynch for language he said was divisive.

"This is not a North Carolina issue. It is now a national issue," said McCrory, a Republican up for re-election in November.

Monday's actions carry immediate practical impact, moving the debate into the courtroom and putting on notice other states that in recent months have proposed similar laws limiting protections for gay, bisexual and transgender people.

In addition, the U.S. Education Department and other federal agencies could ultimately try to cut off money to North Carolina to force compliance.

The state university system risks losing more than $1.4 billion in federal funds. An additional $800 million in federally backed loans for students who attend the public universities could also be at risk.

Beyond that, though, Lynch sought to frame the lawsuit as part of a broader conversation. She likened her agency's involvement in the North Carolina law to the shifting expansion of civil rights that scrapped legal racial segregation and prohibitions against gay marriage.

"This is about the dignity and the respect that we accord our fellow citizens," Lynch said. "It's about the founding ideals that have led this country, haltingly but inexorably in the direction of fairness, inclusion and equality for all Americans."

Mara Keisling, the director of the National Center for Transgender Equality in Washington, said the "silver lining to this very dark cloud" is that the dialogue is "turning into one of the most important educational moments we've ever had."