Houston Astros season opener on hold, due to bad weather 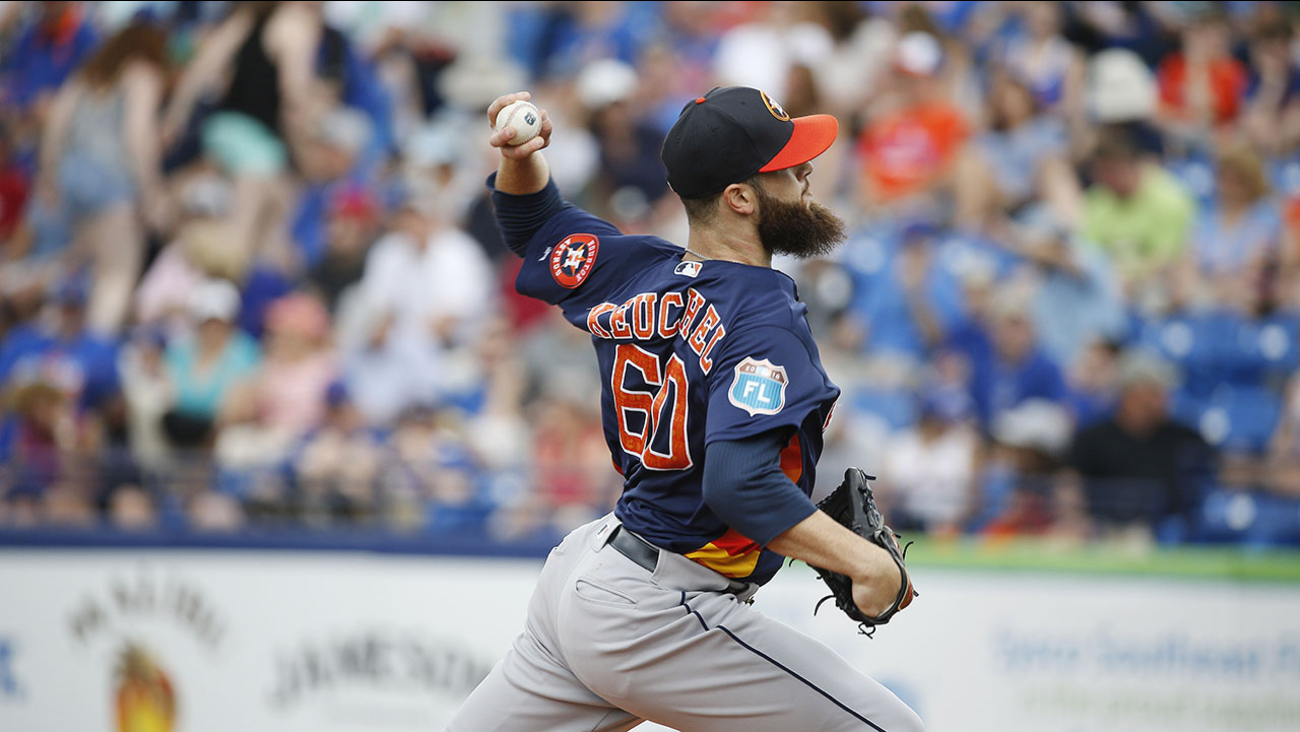 NEW YORK -- The Houston Astros were set to take on the New York Yankees for their opening day, but the weather threw a curve ball.

Today's Opening Day game has been postponed due to inclement weather. It will be made up tomorrow, April 5, at 12:05 PM CT.

When Dallas Keuchel last took the mound at Yankee Stadium, he pitched six scoreless innings on short rest to lead the Houston Astros over New York and ace Masahiro Tanaka in the AL wild card game.

The AL Cy Young Award winner was set to return Monday for a rematch as New York, but the wintry weather forecast put the game on ice.

"It's fitting coming off the wild card game. It's a similar matchup from the last time we played there," Houston manager A.J. Hinch said.

The Astros had planned a workout at the Bronx ballpark Sunday, but it was canceled because of chilly and windy conditions.

After averaging 104 losses the prior four seasons, the Astros went 86-76 and reached the playoffs for the first time in a decade. Houston was ahead 2-1 against Kansas City in the Division Series and led 6-2 in the eighth inning of Game 4 before the Royals rallied to win the game and later the World Series.

New York reached the playoffs last year after its first two-season absence in two decades, but the Astros ended the Yankees' postseason quickly.

Either Brett Gardner or Jacoby Ellsbury, who started the wild card game on the bench, may remain in the dugout when the Yankees take the field Monday. Aaron Hicks, a switch-hitting outfielder acquired from Minnesota for backup catcher John Ryan Murphy, had a .307 batting average against lefties last year.

Three-time All-Star Starlin Castro, acquired from the Chicago Cubs for pitcher Adam Warren and infielder Brendan Ryan, is another right-handed bat the Yankees obtained to stop left-handers' domination of their batting order. Switch-hitting Mark Teixeira was healthy for much of last season and hit 31 homers but missed the playoff game after fouling off a pitch that broke his leg.

New York's other big acquisition, closer Aroldis Chapman, will miss the first 30 games while serving a suspension under baseball's new domestic violence policy. Last year's closer, Andrew Miller, will hold onto that role for now. The left-hander says he won't be slowed by a chip fracture in his right wrist, an injury sustained when he was hit by a line drive last week.

Houston has the same core in its batting order, led by Jose Altuve. The AL leader in hits and stolen bases the past two seasons, Altuve is surrounded by power threats that include Colby Rasmus, Luis Valbuena and AL Rookie of the Year Carlos Correa.

But the Astros did lose Chris Carter, who signed with Milwaukee as a free agent after hitting 90 homers in three seasons for Houston.

Carter's departure left a hole at first base that could be filled by 25-year-old Tyler White, who batted .353 with three homers and 12 RBI during spring training. White would be making his major league debut.

The Astros parted with former No. 1 overall draft pick Mark Appel in December, part of a seven-player trade with Philadelphia, in an effort to shore up the back of their bullpen. The key player in the return was Ken Giles, a hard throwing right-hander who had 15 saves in 20 chances in 2015 and held batters to a .219 average.
Related topics:
sportsnew yorkmlbhouston astrosyankee stadium
Copyright © 2021 by The Associated Press. All Rights Reserved.
More Videos
From CNN Newsource affiliates
TOP STORIES