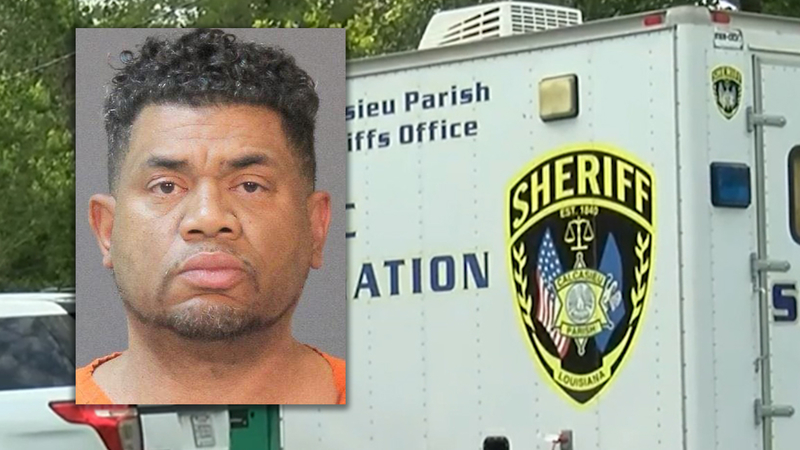 HOUSTON, Texas (KTRK) -- A convicted sex offender and former youth basketball coach who was out on bond for continuous sexual abuse of a child in Harris County is now accused of murder and kidnapping in southwest Louisiana.

Neil Patrick Broussard was taken into custody Thursday morning near Lake Charles after an overnight manhunt, according to the Calcasieu Parish Sheriff's Office.

Broussard was wanted in connection with the killing of two people and the kidnapping of a 14-year-old girl in Westlake, Louisiana.

Deputies were called to a shooting Wednesday in Westlake, Louisiana, and found three people with gunshot wounds.

Hidalgo was taken to a hospital and was listed in critical condition, according to the sheriff's office.

Broussard was described by investigators as a family acquaintance, KPLC-TV reported. Deputies were in the process of obtaining an Amber Alert for the 14-year-old when she was found safe nearly three hours later approximately 17 miles away from her home.

The stolen car was also located.

Broussard is charged with aggravated kidnapping, aggravated battery and two counts of first degree murder in connection with the Louisiana incidents.

WATCH: Louisiana sheriffs explain the massive search for Broussard after two people were shot to death, another was critically injured and a 14-year-old girl was kidnapped
EMBED More News Videos

Calcasieu Parish Sheriff Tony Mancuso and Beauregard Parish Sheriff Mark Herford talk about the arrest of Neil Broussard, who's accused of killing two people and wounding one in a

Broussard is also a registered sex offender. He was convicted of molestation of a juvenile in 2005 and again in 2011 on two counts of the same crime, according to authorities in Calcasieu Parish.

He was awaiting trial in Harris County on charges of continuous sexual abuse of a child that stemmed from a report made in 2018.

La Porte police met with then-22-year-old victim who said she was sexually assaulted by Broussard over a 2-year period beginning when she was 12. The woman told investigators about incidents at multiple locations from 2009 to 2011, including at her home. Broussard was a coach for the TKO Basketball summer league at the time and the victim was on his team, court records state.

The victim said Broussard initially touched her in a motel room where the team was staying during a tournament. The relationship continued when they returned to La Porte, she told investigators. She said Broussard was 40-years-old at the time.

The victim told police the sexual abuse occurred two to three times a week for two years until she stopped the relationship in October, 2011, when she was 14-years-old.

A La Porte officer interviewed Broussard in Lake Charles, where he admitted to coaching the victim and having a relationship with her but Broussard claimed it was not a sexual one, according to court records.

He also admitted to being alone with the victim at her home, his home, and an apartment in Houston for the purpose of letting her take a shower.

Broussard was arrested in April, 2019, in Calcasieu Parish and brought back to Houston, where he was released on a $100,000 bond a week later. He was scheduled to be back in court in September on the La Porte case.

That bond was revoked today by District Judge Joshua Hill, according to court records.