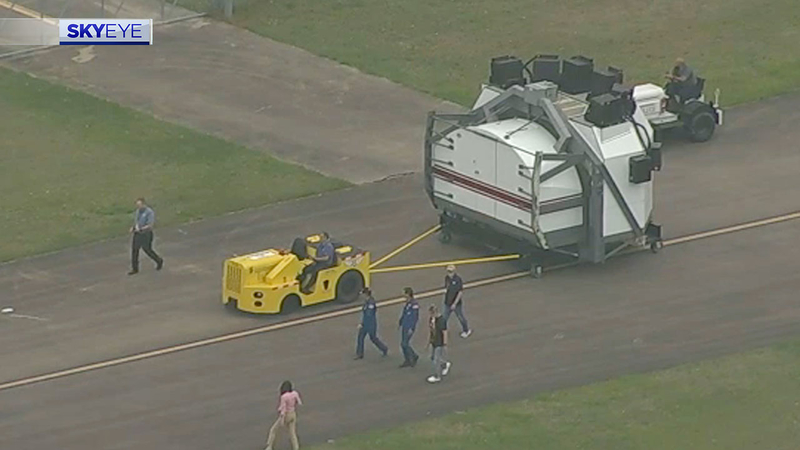 HOUSTON, Texas (KTRK) -- A piece of NASA history made the steady trip to the Lone Star Flight Museum on Tuesday, where it is being permanently housed and on display for space enthusiasts.

The Shuttle Mission Simulator Motion Base, or SMS-MB, was captured on camera by SkyEye as it made the slow approach to the museum located next to Ellington Field in southeast Houston.

According to the museum, the SMS-MB was integral throughout NASA's run for its space shuttle program. It was first used in the 1970s to support the first shuttle mission in 1981.

Most importantly, the Lone Star Flight Museum says the historic equipment required volunteers to spend 5,000 hours to restore the simulator.

The flight museum offered free admission to the public for two hours in the afternoon Tuesday to celebrate the new exhibit's arrival. Lone Star Flight Museum members can see the display for free during normal operating hours.

Additional info can be found on the museum's website.

SMS-MB joins other NASA equipment that is already on display, including a small pressurized rover and the Centaur humanoid robot, which will be used for future missions to the moon and Mars.

"We are going to look back on these last couple of years, 2020 and 2021, as a real inflection point for human space transportation," said a NASA official.

Do you dream of going to space? The future of interplanetary travel isn't just at NASA - it's hidden behind this strip center!