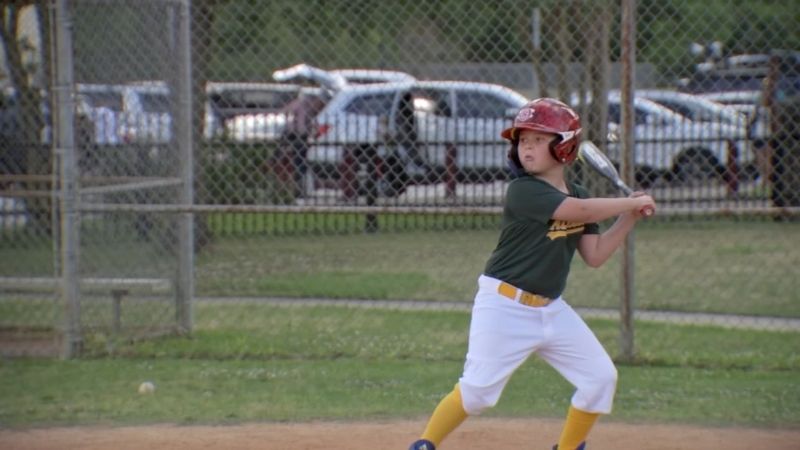 CLEAR LAKE, Texas (KTRK) -- The spotlight is on a NASA Area Little Leaguer after the 8-year-old first base player predicted and dedicated his first home run to two family members who recently passed away.

Bentley Lamar was still holding on to the home run ball and the bat he used to call his shot on Friday night.

Bentley told ABC13 that baseball is his passion, and he hopes to make it big one day.

"It's not all about winning," Bentley said. "It's about having fun. So, that's why I signed up for it."

His father, Shayne Lamar, said their family lost his uncle George Mehas, 60, and his grandmother Patty Lamar, who lived in the Dallas area.

"Our family has been through some tough times lately," Lamar said. "Our uncle, Georgy, passed away, who had down syndrome. And then Grandma Patty passed away about a month later. That was about a month ago."

He said the grief has been difficult for the family, especially since they couldn't visit as much in the past two years due to the pandemic.

At the NASA Area Little League's night game on April 27, Bentley turned to his father and said he would make a home run for his late great grandmother and great uncle.

With his family sitting in the stands, they captured the moment Bentley walked up to the plate, channeled his inner Babe Ruth, pointed to his angels in the outfield, and then hit it out of the park.

It was his first home run.

"It was almost a spiritual moment when he came around, and I hugged him. And I picked him up. It was really great, and that's what baseball is all about," Lamar said.

"When I hit it, I knew it was going over," Bentley said. "I felt excited. My whole team was banging the fence. I ran the bases. It was awesome."

It was a tied-up game, but the moment will live forever for the Lamar family.

"I hit a home run for you guys," Bentley said.