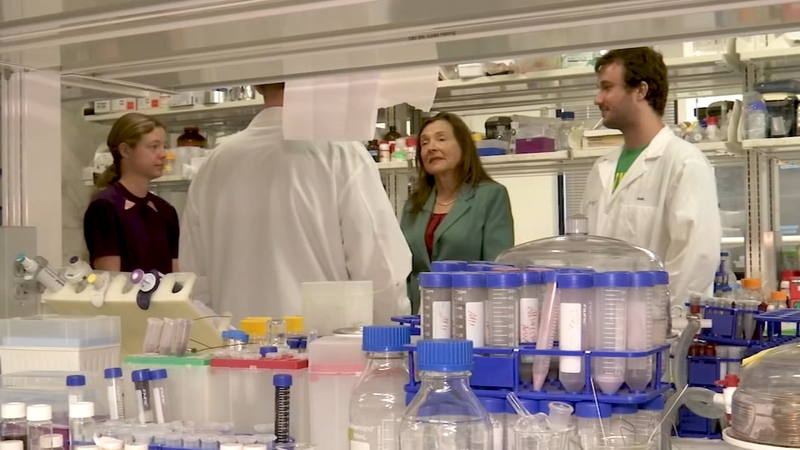 HOUSTON, Texas (KTRK) -- Dr. Naomi Halas' journey to becoming a scientist wasn't always a straight shot. As a child, she knew she was interested in science, but remembers being steered away from it because of her gender. She spent her first two years as an undergrad at La Salle College as a music major, switching to chemistry.

"The major universities that offered STEM education were primarily closed to women until the early to mid-70s. So even if you were interested, you were always perhaps the only female student or one of very few in the classes," she said. "There was some pretty overt prejudice among professors at the time that women didn't really go to school to learn, women went to school to get husbands."

Halas credits Title IX for making it possible for her to become a trailblazing woman in the field of nanotechnology and expanding her scope in multiple fields of science. The civil rights legislation was signed into law in 1972 to prohibit gender discrimination in federally-funded educational institutions.

The 37 words in the Education Amendments of 1972 state, "No person in the United States shall, on the basis of sex, be excluded from participation in, be denied the benefits of, or be subjected to discrimination under any education program or activity receiving Federal financial assistance."

It offers protection for student-athletes, LGBTQ+ students, students who are pregnant or parenting, victims of sexual violence or violence, and more. The law also applies to admissions, recruitment, financial aid, and disciplinary action. This year, June 23 will mark its 50th anniversary.

"Title IX had a profound influence on academia and science. Before Title IX, it was completely acceptable to close the door on people who were not male. It didn't come without trials either. There were lawsuits at major institutions," she said. "But the doors began to open and I'm not sure that I would've had these opportunities in my career if it wasn't for Title IX. I was told girls just don't take physics. If I took physics, I would never get a date. My husband of 36 years is a physicist, so that's not true."

She went on to receive her Ph.D. in Physics at Bryn Mawr College and then studied optics and photonics for her graduate research at IBM Yorktown. Her academic career began at Rice University in 1989 and she's taught a range of subjects including electrical and computer engineering, chemistry, biomedical engineering, physics, and astronomy.

"One of the most exciting things about science ... is one tends to study things and work in a field for several years, maybe even several decades. But then we often reinvent ourselves, moving into new problems and new fields ... as scientific challenges appear, become interesting, and available for people to study."

According to our media partner, the Houston Chronicle back in September 2019, Halas developed what she hopes may be a cure for prostate cancer. It's a treatment method involving nanoparticles, which can be 500 to 10,000 times thinner than a human hair. She invented the particles called "nanoshells "back in 1997, which are coated with a thin layer of gold.

Three years later, she and a colleague found a way to use these particles to attack cancer cells. They founded a company, Nanospectra Biosciences to develop the technology for commercial use. After a year, 13 out of 15 patients it was tested on were cancer-free. Now, as they wait for the FDA's approval, Halas explained why this achievement has a personal meaning for her.

"My father was a prostate cancer survivor. This is a very common cancer. One in nine men have to deal with this. If you're a man with a relative that has prostate cancer, your likelihood is one in three," she said. "We began our first experiments to show that we could shrink tumors very easily with nanoparticles in light and eliminate the side effects of treatment. The clinical trials have shown outstanding success. The idea that we can deliver an early treatment that eliminates the side effects that are well-known is a huge humanitarian breakthrough."

As she reflects on the upcoming anniversary of Title IX, Halas believes there is still work to be done to achieve gender equity in education. For one, she'd like to see more women at the faculty, professor, and leadership level. She encourages the next generation of female leaders to continue pursuing their passion and fighting for a spot at the table, even when the odds are against them.

"What I experienced and what people my age experienced was very different than what college students experience today. You're standing on the shoulders of people who have had larger barriers. I hope people appreciate the fact that it's a completely different landscape than it was a few decades ago," she said. "With Title IX, you can still focus on science, being excited about your work, and also having a family and a life. The 21st century has enormous challenges and we need women with STEM backgrounds. We need to convince young women that your life can be very exciting if you become a scientist."

Looking ahead, Halas and her colleagues are focusing on a company they started called Syzygy Plasmonics. Its website says it's a technology company developing a new type of photocatalytic chemical reactor to reduce the cost and emissions for major commodity chemicals, such as transportation field, fertilizer, and plastic.

"We have more than 50 employees and they are making hydrogen at record efficiencies. Therefore, they are lowering the cost literally month-by-month and that's a very exciting thing. We talk a lot about climate change and we need to be developing new technologies that are addressing this in practical ways," she said.

Click here to read more stories from our Fifty/50 series

The Walt Disney Company is the parent company of ESPN, Localish and this station.