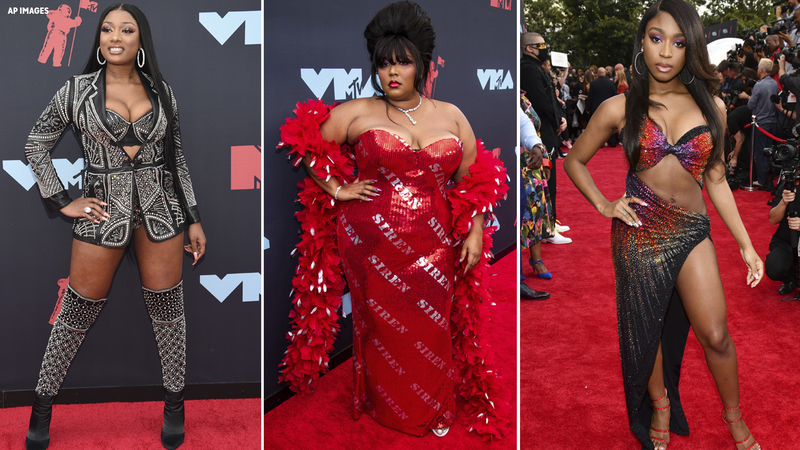 NEWARK, New Jersey (KTRK) -- The phrase "H-Town Takeover" is usually reserved for the University of Houston football team, but it's also fitting when you're talking about the Houston stars who stood out at the MTV Video Music Awards Monday night.

Normani, who is a former member of the group Fifth Harmony, made her solo VMAs debut.

She performed her new song "Motivation" on a basketball court, arriving on the stage seated on a hoop.

Fans praised not only the performance and its choreography, but also the way Normani pushed through during a wardrobe malfunction.

During the song, a backup dancer was supposed to help her with an outfit reveal, but her jacket wouldn't come off. He eventually had to rip it off of her.

Missed any of her performance? Watch it On Demand now! pic.twitter.com/gh6dQ3Iofu

Houston girls know how to show each other support. When the camera panned to the crowd, Lizzo, who grew up in the Alief area, could be seen dancing to Normani's hit.

Lizzo was called one of the best dressed of the night, walking the red carpet in a red, strapless sequin dress with the word "Siren" on it and a feather boa wrapped around her arms.

Lizzo performed a couple of her hits including the chart-topping "Truth Hurts," which was released in 2017 but became a worldwide hit this year. During her performance, Lizzo chugged from a bedazzled bottle of tequila.

She was nominated for the Best New Artist award but lost to singer Billie Eilish.

Lizzo recently stopped in the Bayou City, visiting the University of Houston's marching band and cheerleaders before visiting with mentor and former band director Manny Gonzales at Elsik High School.

.@Lizzo didn't text us, she told it straight to our faces... 👀 pic.twitter.com/gAVX1R0MWx

Alief ISD, where so much talent is cultivated and supported! So thrilled to host Elsik grad and amazing recording artist Lizzo today! Pic of Lizzo with mentor and former band director Manny Gonzales #AliefProud #AliefMission pic.twitter.com/d2WXibzTNu

PHOTOS: See the red carpet looks from the VMAs

Rapper Megan Thee Stallion also made sure the crowd at the Prudential Center in Newark, New Jersey, where the show was held for the first time, knew about her Houston roots.

She performed during the pre-show and gave a shout-out to Houston, even rocking a costume with a Texas flag on the sleeve.