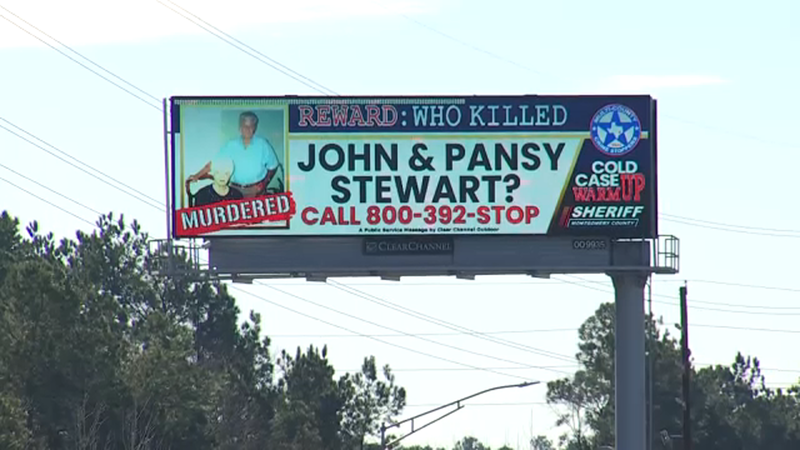 Campaign seeks leads in couple's murder from 25 years ago

MONTOGMERY COUNTY, Texas (KTRK) -- The Montgomery County Sheriff's Office is seeking new leads in one of their only unsolved double homicides, nearly 26 years after a man and his wife were shot to death in their Conroe home.

Detectives announced a new "Cold Case Warm Up" initiative, featuring unsolved crimes on a digital billboard that can be seen by I-45 drivers heading into Montgomery County. The hope is to shed new light into decades-old cases, like the one involving John and Pansy Stewart, forgotten by many.

John Stewart Sr., 78, and his wife, Pansy, 74, were found dead in August 1995 in their living room inside their house on Foster Drive.

The home had been ransacked and a number of items were stolen, including: a man's two-tone gold Rolex watch, assorted women's jewelry, a 40-caliber handgun, a Remington model 742 semi-automatic rifle, a C.V.A. 31-caliber black powder handgun, and a man's white metal ring with a "Mobil Oil emblem." Detectives believe the couple had been killed seven days earlier.

The first of many digital billboards was unveiled Tuesday morning, picturing the Stewarts and a number people can call to report any information they may have on their cause of death.

A spokesperson with Clear Channel Outdoor, the advertising company used to make the billboard, said the billboards will be placed in Conroe, but will also be placed in Galveston, Harris, Fort Bend and Austin counties.

"These messages will generate over 2 million market impressions in the first month they are displayed," the spokesperson said. "Someone somewhere knows something about this case."

John Stewart Jr. also spoke at the briefing, asking the public for help.

"We need closure. My parents need justice," said the son of the murder victims. "I just would like one person to say something that would help us solve this."

The Stewarts left behind two daughters and a son. If you have any information regarding what happened to them, call the Montgomery County Sheriff's Office at 800-392-STOP. If your anonymous tip helps solve the cold case, you could be eligible for a cash reward.

ABC13 reporter Courtney Fischer dedicates much of her time featuring cases like these in her 13 Unsolved Series. Viewers can watch her in-depth, deep dive into cold cases from all over the Houston area on our free ABC13 streaming apps for Roku, Amazon Fire TV, Apple TV, Android TV or wherever you stream video.