Constellation Field tried out the automated umpire system in 2019 when the Skeeters were in the independent Atlantic League.
KTRK
By Adam Winkler 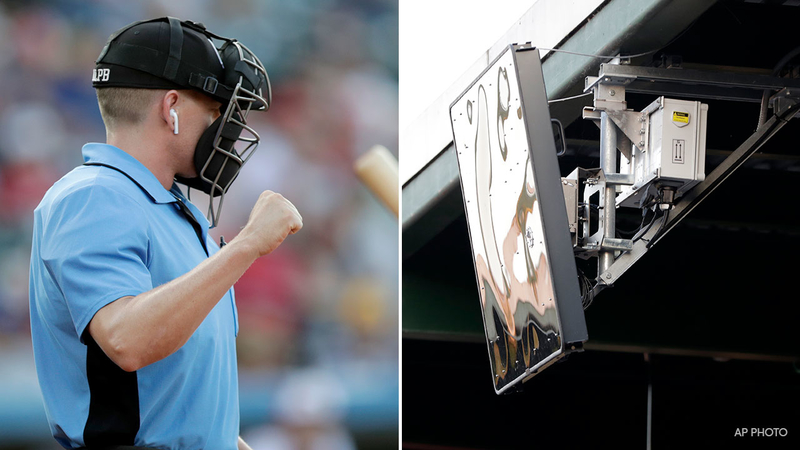 Robot ump to be used in Sugar Land for 2022 season, MLB sources say

SUGAR LAND, Texas (KTRK) -- On April 12, when the soon-to-be-renamed Sugar Land Space Cowboys play their first home game of the 2022 season at Constellation Field, they'll do it with a robot umpire calling balls and strikes.

A high-ranking Major League Baseball official tells Eyewitness Sports that the Automated Ball-Strike system will be utilized by all Triple-A West division teams in 2022 - the division in which Sugar Land plays. In a phone conversation with ABC13, a Sugar Land spokesperson confirms the team will be using the technology.

The Automated Ball-Strike system, according to the MLB source, will relay the ball-strike call to the human home plate umpire through an earpiece connected to an iPhone.

MLB.com lists a job opening seeking Data Operations personnel for the 2022 season for AAA West to "digitally score games from the ballpark." A source tells ABC13 neither the Astros nor Space Cowboys will be making this hire - it will come from MLB.

Robot umps were used last season in eight of nine ballparks in the Low-A Southeast League. Triple-A is the highest level of minor league baseball.

When Sugar Land played as an Atlantic League team in 2019, the team used the Automated Ball-Strike system. Ed Nelson, a former Houstonian with 38 years of umpiring experience, worked many of those games.

"It says 'ball' and 'strike' - that's it," Nelson explained. "Nothing more, nothing less. You're focusing on your hearing rather than your instincts. Is it the perfect thing? Hell no."

When asked if the automated system would be used in Major League Baseball soon, Nelson expects it to be a while.

"I am amazed at how quickly it's moved from Low-A and Independent ball to Triple-A," Nelson admitted. "But a lot of people have a lot relying on it, so if the technology can do it - you do it."

The marriage between the Astros and Sugar Land Skeeters is official. So, how will this work between the clubs? The video gives you the details.

Since it was announced that the Sugar Land Skeeters were rebranding, we've dug into the process of a Minor League Baseball rebrand.