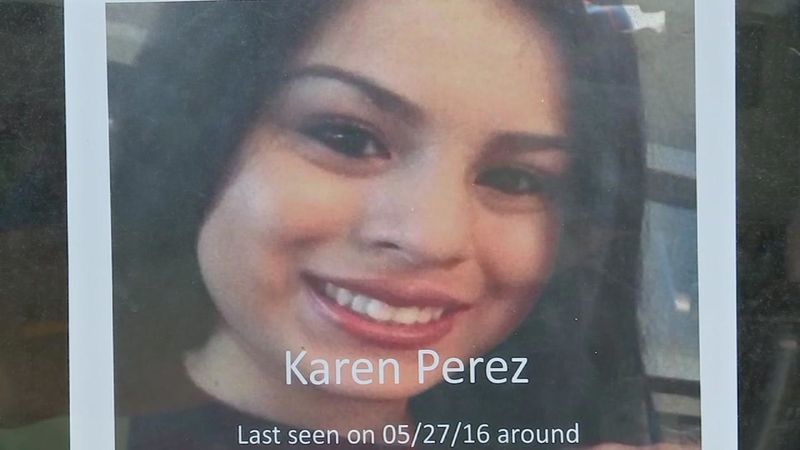 SOUTH HOUSTON, TX (KTRK) -- We are still waiting for police confirmation on the identity of a young girl whose body was found at an abandoned apartment complex in South Houston. But EquuSearch's Tim Miller says the body found last night is 15-year-old Karen Perez.

A male juvenile suspect is in custody following the discovery of the body. The 15-year-old has been charged with murder.

We are getting our first look at surveillance video from the day Karen Perez went missing. Watch the video in the player above.

Video from a nearby taqueria shows Karen walking into the store followed by two young men. Witnesses say one of those young men is a friend of Karen's the other her ex-boyfriend.

After Perez leaves the store she was not heard from again.

The young girl's aunt spoke with us about that complex, she and many others want it torn down.

Maria Perez, said, "Everybody knows that when they skip (school), they come here to this property, and it's so dangerous and I can't believe nobody has (done anything about it)."

Police would not say much about the suspect.

The body was found in the apartment complex in the 1600 block of Avenue N at 12th Street. Miller says he found the body himself.

Karen Perez went missing after leaving South Houston High School with her ex-boyfriend, the school is across the street from the the abandoned complex.

Late Monday night volunteers from Texas EquuSearch discovered the body during the search for Karen Perez, who went missing Friday after she allegedly left nearby South Houston High School with her ex-boyfriend.

Perez's friends say the missing 15-year-old was a good person.

Mckayla Zbranek, Karen Perez's friend, said, "I had a couple of classes with her, she was a real sweet girl. She was really outgoing and she was always happy."

Those who live near the abandoned apartment complex where the body was discovered say the complex needs to be torn down.

Resident Jose Carbajol said, "If it was my daughter, I would be pushing to get these ripped down. Look at that, it's by the high school. It's very sad that this happened so close."

South Houston Police say they will know much more about the missing person case once the body is identified by the medical examiner.