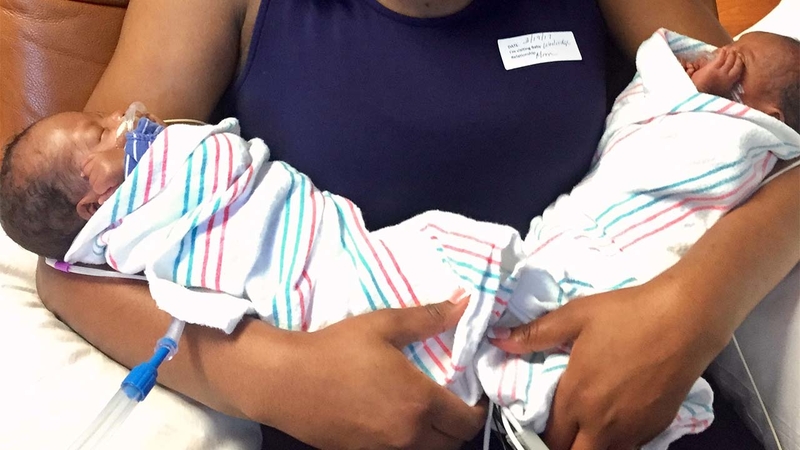 Arthur was born at just 26 weeks gestation and weighed 2 pounds, 2 ounces. Now, more than doubling his weight, he's close to going home from the hospital.

But what makes him all the more special to his parents is that he's a twin.

His sister Amara, who is also in intensive care at Memorial Hermann The Woodlands Hospital, weighed only 1 pound, 3 ounces.

"When I saw her feet kicking that was just the best moment," said the twins' mother Latroya Woolridge. "At the same time, I was afraid of what was going to happen next because she was so tiny."

It was a difficult birth followed by intensive care.

"Twenty-four weeks delivery is more than four months early, and it's really right on the borderline at where babies will survive," said Dr. David Weisoly, a neonatologist and medical director for the Neonatal Intensive Care Unit at Memorial Hermann The Woodlands.

Together, Amara and Arthur not only beat the odds for babies born so prematurely, they also beat convention.

They were born two weeks apart.

"I can see her saying, 'Oh I'm going to get my license 14 days before you,'" joked Latroya.

They also have different astrological signs. Amara is a Capricorn and Arthur an Aquarius.

She was born under one presidential administration, he another.

"Initially the theory was that she was the feisty one and she said I'm out of here," said Latroya. "Now I think it's more that he said, 'Get out!'"

As happy as the Woolridges are now, and so close to having their children at home, their delivery was not easy.

Latroya drove herself to the hospital in a storm when she felt pains she knew weren't normal. Her husband was at work.

"For a dad and a husband it was terrible," explained Arthur Woolridge II. "To be on the phone with her while your wife is in labor."

"I wasn't even sure I was going to make it to the hospital," said Latroya. "Thankfully, we made it here safely."

During labor, they made the decision to deliver one and hope the other would stay put for a while. He did. The risk for both was that their lungs and their circulatory systems, both of which are doing well, might not develop properly.

The twins may go home before their original due date of May 5.

They are twins with different birthdays and different personalities, but one singular story to tell.