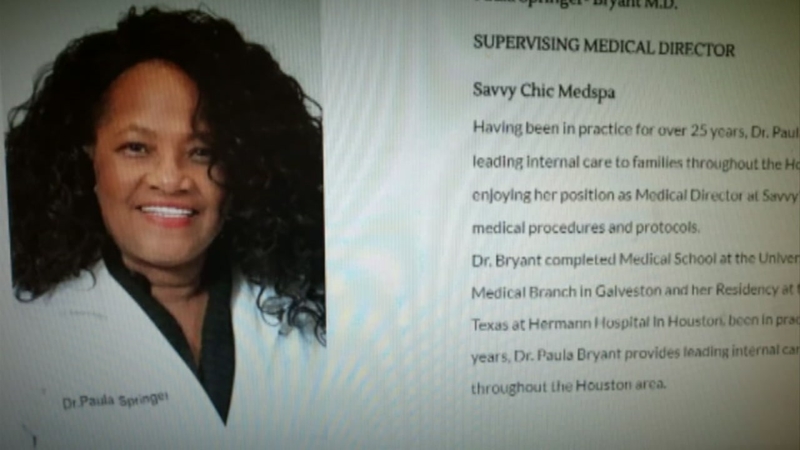 SPRING, Texas (KTRK) -- Nearly a week after a nurse was arrested for alleged unlicensed Botox injections out of a medical spa in Spring, the clinic's supervising medical director faces charges for aiding the illegal procedures.

On Wednesday, ABC13 learned an arrest warrant was issued for the arrest of Dr. Paula Springer-Bryant. Documents list her charge as practicing medicine in violation of subtitle.

Springer-Bryant works out of the Savvy Chic Medspa, where Michelle Bogle, the director of nursing at the skin rejuvenation clinic, was taken away in handcuffs on Nov. 8.

Bogle was booked into Harris County Jail on the same practicing medicine in violation of subtitle charge.

Prosecutors said while Bogle has been a licensed vocational nurse for 17 years, she is not licensed to perform nonsurgical medical procedures.

ABC13's Marla Carter followed a nurse accused of illegal Botox injections as she left a jail on Thursday.

ABC13's efforts to reach Springer-Bryant - by phone or in person at her clinic - on Wednesday were not successful.

Eyewitness News, though, received comment from Bogle's attorney, who asserts the nurse believed she was following statute and that Houston police, whose officer went undercover as a patient, are overreaching. The attorney asserts the police department receives multiple complaints about unlicensed Botox procedures and it is making an example out of Savvy Chic.

Officer-involved shooting at Beechnut/Fondren: A @houstonpolice officer first used a taser to fight off man, then her gun when the taser didn’t work, per #HPD. He pulled off her body camera during the attack. Officer shot him once. He died at the hospital. #abc13 pic.twitter.com/iKMUf18D99

Michelle Bogle is released from jail, after being charged with practicing medicine without a license.